© Noemie Goudal, The Wind Blows, from the series Island, 2009 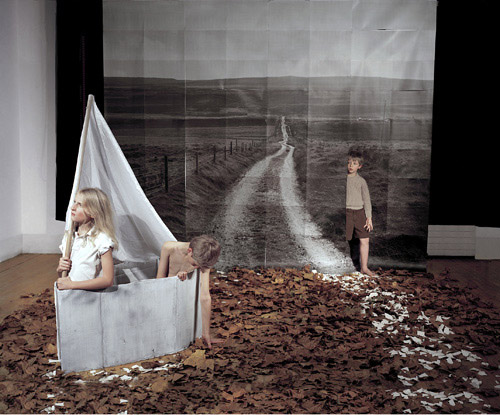 © Noemie Goudal, Les Passeurs (the smugglers), from the series Island, 2009

“Noemie Goudal’s practice uses the photographic image to interpret stories told to her during her time visiting the island of Orkney, Scotland. The central question of her project is this: How can a story which occurred over time, be represented via the stasis (or single moment) of the photographic image? Each image represents a chapter; these images come together to form a fragmented narrative that suggests more than an isolated moment in time – instead, they collectively reveal the passing of a sequence of events.

These images tell tales of nostalgic memory and a want to escape from island life. They are not stories that describe an island as a place for escaping to (as is the case with the aforementioned Huxleyan islomania), but rather of an island as a place that may be escaped from, made clear by the presence of the boat, the empty longing bleakness of the yellow-lit harbor, and the flooding of the local church in these photographs. These images seem to represent the end of a period of time for the characters that appear within them – the photographs describe a youthful reminiscing of sorts, while the character’s expressions simultaneously reveal a calmed need for desertion, or an uneasy consolidating of past experience. These children have out-grown this limited space, no doubt witnessing others leave along the way.

In Goudal’s work, stories from Orkney are staged or reinvestigated within the confines of the photographic studio. The landscapes in these images are imposed on an artificial space. The image hung as a backdrop is comprised of a multitude of photographic prints, linked together to evoke a concise sense of place. Like a theatrical production still in rehearsal, all scenographic elements are exposed: the set itself is laid bare, the contents of the backdrop feed directly onto the stage, and foreground objects such as lights and electrical cabling – usually obscured from view – are present for all to see.”

excerpt from an essay first published in Hotshoe magazine