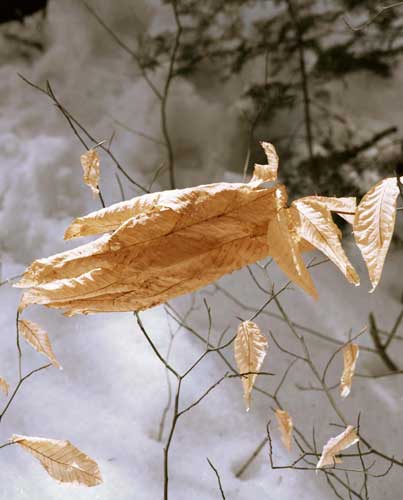 “The series of The lure (2004) is composed of ten photographs in big format are imprinted on silk cloth (127 x 154cm). The Lure’s representing glove plants, placed in situ so as to make belief that they come from nature. These photography’s suggest the influence of biotechnologies over the environment – objects/hands prepared with vegetable matter – sewn, stitched with string thread, weaved and produced on a small scale. Equivalences are established between the hand and the plant and between the skin and organic matter. These objects present themselves as objects of study – belonging to the sciences and occupying the center of the photographic image inspiring the botanical taxonomies to which this project makes reference. The hand motif is recurrent and recalls the important presence of humans and their relation to the environnement but the motif also appears as the sign of change in nature. Natural mutation as a biological phenomenon inscribes itself in the genes of living organisms and participates to organique changes of the current landscape. The photographs express this relation and the vital and reciprocal influence of the object in a place, in nature and to human nature. I propose a lure of biotechnologie as a result of experimentation and genetique manipulation. I hope his work prompts viewers to question modern agricultural practices, which have become, in his words, “dubious science” in the age of genetic engineering.”

More of Luce’s work can be seen here