Abandoned, discarded, unwanted film is woven into handmade artefacts and photographic prints are created in the darkroom from constructed negatives. Time becomes an integral element, with each print or object measuring a duration of film. This recent work explores the materiality of photography and film in the digital age and creates a dialogue between the still frame and the moving image.

Mary Stark is searching for celluloid. It’s an exploration that, paradoxically, began in the digital space.

“I was interested in working digitally with video,” says Stark, who recently completed an MA in Photography at MMU. “Then I realised that, of course, all this digital film has a physical ancestor. It’s like a piece of thread.”

The thread analogy is important. Stark’s BA, also at MMU (she graduated in 2006) was in Embroidery. She has combined both the material physicality of film and the action of weaving for her Cornerhouse Micro Commissions project, Searching For Celluloid. “The idea is to develop film as a material,” she explains, “to turn a whole feature film into a physical object.”

The interface between analogue and digital is providing increasingly intriguing creative possibilities, and particularly interesting in Stark’s case is the fluid relationship between the two – there is no sense of either/or, no digital/analogue divide.

“I’m using digital tools to help me design the patterns I’m creating with the celluloid,” says Stark. “I’m interested in the dialogue between stitch and film, both digital and analogue.”

It’s an interest that has also led Stark to explore a process of ‘weaving’ digital film footage together (see Vimeo video, above). A celluloid film is projected, captured digitally on video and then woven together using Final Cut Pro: “It’s quite experimental at this stage,” she says. source: digital innovation 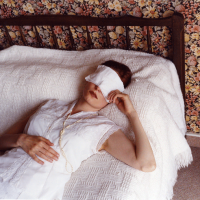