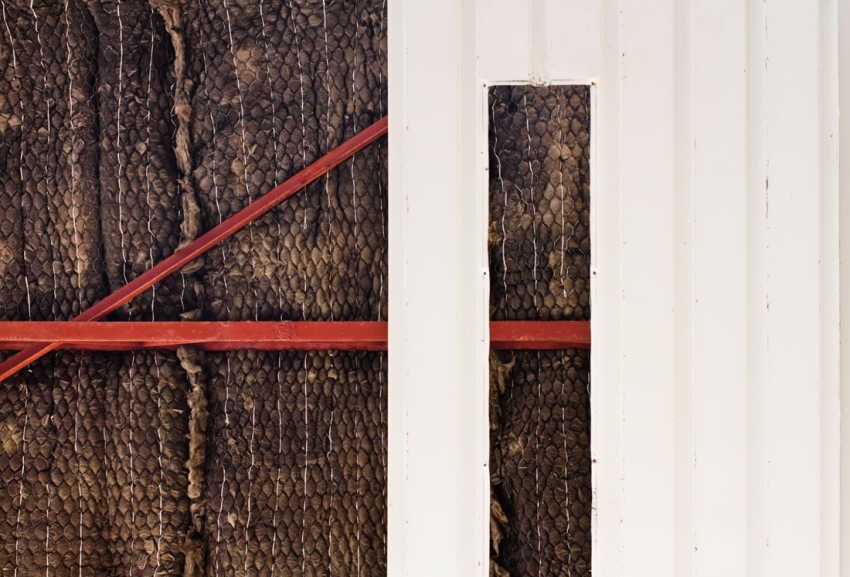 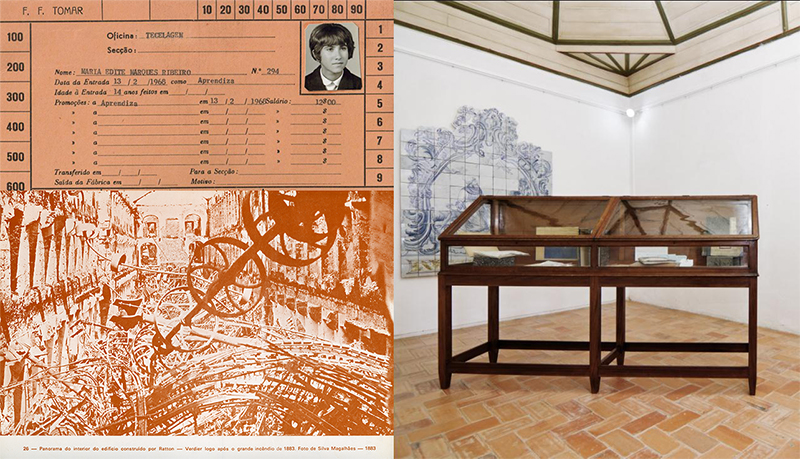 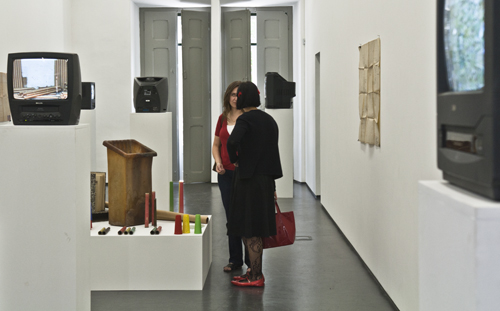 “Each video depicts an intervention in the abandoned space of Fábrica da Fiação. They are loops, without a beginning or an end, which brings them closer to photography rather than video.(…)”

“Micael Nussbaumer’s installation, “O Registador”, explores objects and spaces from the abandoned «Fábrica da Fiação de Tomar». The choice of this weaving factory as the main subject of this exposition was due to the perfect analogy found by the artist between the concepts he wanted to expose and the history of that enterprise.

The beginning of this factory can be described as an attempt to modernize Portugal, following the industrial revolution happening in Europe, meanwhile empowering the national bourgeoisie by increasing competitiveness. It wasn’t randomly that Tomar was chosen to host such enterprise, it was the surrounding environment that created this opportunity; the local river, Nabão, could use the new hydraulic technologies that were spawning across Europe. Effectively it was here that for the first time these technologies were used in Portugal. But even this didn’t prevent its decline in different times as a result of bureaucratic, political and economical reasons. The factory that employed hundreds of families across the region, boosting local development and economy through 200 hundred years under different administrations, close its doors completely in 1975, after a fire, being until this day abandoned. (…)” Micael’s statement. continue reading here

Micael’s work is multi-dimensional enough but I’ll have to add another layer: a personal one. No family member was an employee of the Weaving Factory Micael’s work refers to, nor have I heard personal accounts of what was like to work there, but I do know people who slept, cooked, fucked and partied there not that long ago and that adds a new layer, one related to the memory of affections. In the midst of this sort of living happening at the Factory, I witnessed life and chaos fulfilling the space and I’ve stared death in the eyes. When Micael comes about rearranging the collective memory of this space as if some internal order could bring objects back to life he manages not only to give it a new form – by repetition chaotic systems are put into order, conceptually, abstractly – but he is also making an offering to his viewers, whether he/she realizes it or not. Objects presented in Micael’s installation have a life of their own, they have a soul. They are not inert. They move, they transform, they affect you. They shared the same humid space hundreds of workers did and they were there when it happened… because Micael insisted on the remains of this particular history, these material depictions are kept alive, breaking through the smell of destruction brought upon that place. Sofia

“Some time in 1965 Bruce Nauman made a plaster cast of the space under his chair. Perhaps it was late in the year, after Donald Judd’s “Specific Objects” essay had appeared, or perhaps earlier, for example in February, in relation to Judd’s review of Robert Morris’s Green Gallery exhibition, or in October, after Barbara Rose had published “ABC Art,” her own bid to theorize Minimalism. In any event, Nauman’s cast, taking the by-then recognizable shape of a Minimalist sculpture, whether by Morris or Tony Smith, or Judd himself, was more or less cubic, grayish in color, simple in texture … which made it no less the complete anti-Minimalist object.

Several years later, when the tide against Minimalism had turned, and the attack on Minimalism’s industrial metaphor-its conviction in the well-built object, its display of rational tectonics and material strength-was in full swing, this reaction would move under the banner of “Anti-Form,” which is to say a set of strategies to shatter the constructed object and disperse its fragments. But Nauman’s cast, which he repeated the following year in two other forays-Shelf Sinking into the Wall with Copper-Painted Plaster Casts of the Spaces Underneath (1966) and Platform Made up of the Space between Two Rectilinear Boxes on the Floor (1966)-acting well before anti-form, does not take this route of explosion, or dismemberment, or dissemination. It does not open the closed form of the fabricated object to release its material components from the corset of their construction, to turn them over to the forces of nature-gravity, wind, erosion- which would give them quite another articulation, one cast in the shadow of natural processes of change. Rather, it takes the path of implosion or congealing, and the thing to which it submits this stranglehold of immobility is not matter, but what vehiculates and subtends it: space itself.

Nauman’s attack, far more deadly than anti-form-because it is about a cooling from which nothing will be able to extricate itself in the guise of whatever articulation-is an attack made in the very name of death, or to use another term, entropy. And for this reason, the ambiguity that grips these residues of Nauman’s casts of interstitial space, the sense, that is, that they are object-like, but that without the title attached to them like an absurd label, one has no idea of what they are, even of what general species of object they might belong to, seems particularly fitting. It is as though the congealing of space into this rigidly entropic condition also strips it of any means of being “like” anything. If the constant utilitarian character of Minimalist objects-they are “like” boxes, benches, portals, etc.-or the more evocative turn of process works, continued to operate along the condition of form, which is that, having an identity, it be meaningful, it is the ultimate character of entropy, Nauman’s casts force us to realize, that it congeal the possibilities of meaning as well. Which is to say that this conception of entropy, as a force that sucks out all the intervals between points of space, not only understands the “Brownian movement” of molecular agitation as slowed to a stop, but also imagines the eradication of those distances that regulate the grid of oppositions, or differences, necessary to the production of meaning.

Although he never, himself, pushed his own concerns with entropy into the actual making of casts, Robert Smithson had always considered casting as a way of theorizing entropy, since he had written about the earth’s crust as itself a giant cast, the testimony to wave after wave of cataclysmic forces compressing and congealing life and all the spatial intervals necessary to sustain it. Quoting Darwin’s remark “Nothing can appear more lifeless than the chaos of rocks,” Smithson treasured the geological record as a “landslide of maps,” the charts and texts of the inexorable process of cooling and death.3 For each rock, each lithic band is the evidence of whole forests, whole species that have decayed-“dying by the millions”-and under the pressure of this process have become a form of frozen eternity. In a movingly poetic text, “Strata: A Geophotographic Fiction,” he attempted to prize apart these layers of compression, alternating blocks of writing with strips of photographs showing the fossil record trapped within the magma of the rock, as the demonstrative presentation of wave after wave- Cambrian, Silurian, Devonian, Permian, Triassic, Jurassic-of wreckage.”

More of Micael’s work can be seen here