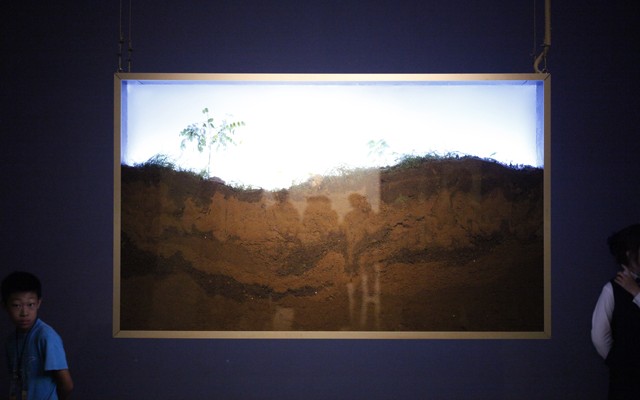 When one stands before a landscape, two lines of thought appear. One treats the landscape as a framed fragment of our field of vision, distanced plane of forms and tones, structured by our viewpoint. The other, in contrast, follows the grass from underneath our feet to the distance, hears the resonance of the wind in our ears, smells the soil, synchronizes the pulses of the body with the life inside the view. Abstractions, mathematization and objectification of nature emerge from the first line of thought, just as theories of perception, duration and experience from the second. But still they exist as parts of the same view.

It has been estimated, that if we would have to build all that which the earth provides for us now for free, the number would exceed all measurements. The great machine is, it seems, economic by nature.

ANATOMY OF LANDSCAPE consists of two large, painting-like landscape images. As the viewer comes closer to the painting, it becomes visible that the image consists of live plants and real soil. Automatic watering-, ventilation-, heating- and light system, necessary for sustaining life inside the painting, is visible from the other side of the frame. The lights change accoording to the daytime from sunrise to sunset.

When a creature dies, it’s inner time ceases. It does not experience time, but becomes an object in the flows of the other’s times. This is why photographic time is always ponting out to the viewer: the absence of the other, revealed by photography, makes the viewer painfully concious of her or his own presence. Photographing a dead body, as the early photographers did on battlefields and graveyeards, doubles this absence. The other is dead, and in the photograph even the death itself has passed away.

Still, death as absence of time is just one point of view. Time does not cease – instead, vivid life continues inside the corpse. The community of microbes live on, interaction with the surrounding world continues as gazes and organic compounds are relesead from the body. The transition from subjectivity to an object is a proces much longer then the moment of dying. The ritual of a wake besides the dead body has served as a way to live thought this phase of transition.

The video installation IN AND OUT OF TIME shows a diptych of a calf, that has just passed away. The image on the left shows a recording of the calf as seen with an ordinary video camera. The image on the right shows the same calf, as seen with an infrared camera. The video’s are in synchrony: as the body of the calf cools down, it’s image slowly vanishes from the infrared image. The original recording time of 7 hours is visible as a time code in the video. The duration of the projection is 4,5 hours

Terike’s amazing body of work can be “seen” here