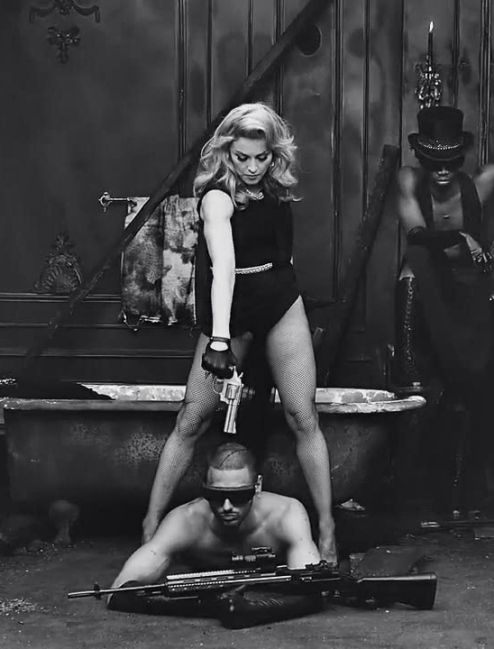 Madonna, whether or not you like her music, has, alongside it, built a body of visual work that is inseparable from her musical choices. Earlier in her career one could find an exploratory attitude in the way she searched for an image of her image. Afterwards, one could see her settling with symbolic universes, though the media chose to almost always (and quite stupidly) discuss the amount of inches of naked flesh shown, instead of focusing on the visual and cultural discussion that could be brought by the various taboos involved.

In this image, by Steven Klein, produced for the new Secret Project, one can already foresee the controversy. In it we see Madonna, central stage, pointing a gun at the head of a sniper (?), with SM-like gloves, sunglasses and holding what appears to be a precision weapon. In the background, a guy whose uniform looks something similar to the one worn by the guy on the floor (which is about to be shot, as can be seen in the video below) and that, given his position, seems to be collaborating, or at least is neutral, in relation to what is about to happen. The scenario seems to be a mix of a local guerrilla skew with a bourgeois accommodation.

Venturing into the possible reading within the image, one should not only remember the previous symbolic apparatus called upon by Madonna, but also her political statements favouring women, egalitarian issues of race, the role of gender and sexuality, Obama, etc.. From these multiple perspectives lets then question the image: what power is it that Madonna embodies, of abuse, of dominance, of violence? Who is about to be executed and why? Why is violence being silenced with more violence? Why does someone, apparently one’s own similar, witnesses the execution, quiet and peacefully? Why does it all take place in a bourgeois setting?

Assuming that the media’s hysteria is going to hold on to a fleshless bone, choosing to criticize the glamorization of violence (as if the entire Hollywood industry didn’t exist … and so on!), whereas the moment, in the USA and all over the world will benefit from one much needed debate: what serious and substantive measures may emerge over the use and possession of a weapon, both concerning the citizens and the police force? What is the role of the citizen that, while watching is similar being assaulted, stays put in the dark corner of his little SM bourgeoisie? Even if these were the only possible questions raised by this image, for them alone it would be worth looking at it in another way, whether one likes it or not – the image, the character, or even her music