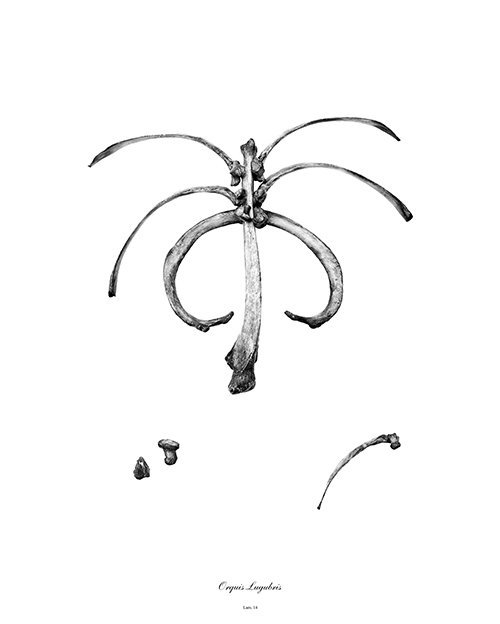 «Asked on a radio interview a couple of years back why he drew animals and not people, the great cartoonist Chuck Jones of Bugs Bunny and Road Runner fame replied: “It’s easier to humanize animals than humanize humans.” Recently the Colombian artist Juan Manuel Echavarrı´a gave this a twist. Reacting against the stupendous violence in his country, he humanized flowers by photographing them like botanical specimens, replacing the stems, leaves, flowers, and berries with what look like human bones. He called this series of thirty-two black-and-white photographs The Flower Vase Cut, referring to the name of one of the mutilations practiced in the Colombian violencia of the 1940s and 1950s in which the amputated limbs were stuffed, so it is said, into the thorax via the neck of the decapitated corpse. 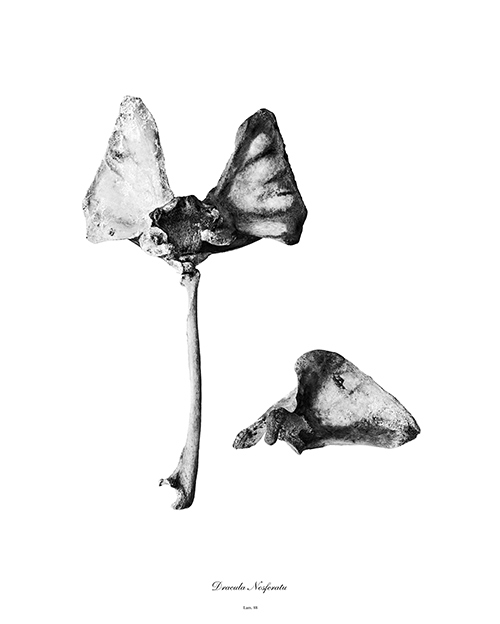 At one point in an interview, Echavarrı´a says, “My purpose was to create something so beautiful that people would be attracted to it. The spectator would come near it, look at it, and then when he or she realizes that it is not a flower as it seemed, but actually a flower made of human bones — something must click in the head, or in the heart, I hope.”

I myself do not see it that way. The flowers are so obviously not flowers. Instead it is the very clumsiness, the deliberateness of the artifice of posing bones as flowers, that perturbs one — and this is of the same order of artifice that makes the mutilation of the Corte del Florero so powerful, too.

The flowers in Echavarría’s photographs have stems made of curving ribsor of the decayed long bones of arms. The petals are formed from what appear to be the human pelvis or spinal vertebrae. In some photographs, small bones like teeth or chips of bones lie to one side, thereby disturbing pretensions to symmetry or completeness. A vertebra hangs delicately off a rib, five of which are bunched together like plant stems emerging from a column of three vertebrae glued together, not as in the human spine, but separated from that, like a child’s building blocks, then stuck front to back, one on top of the other. 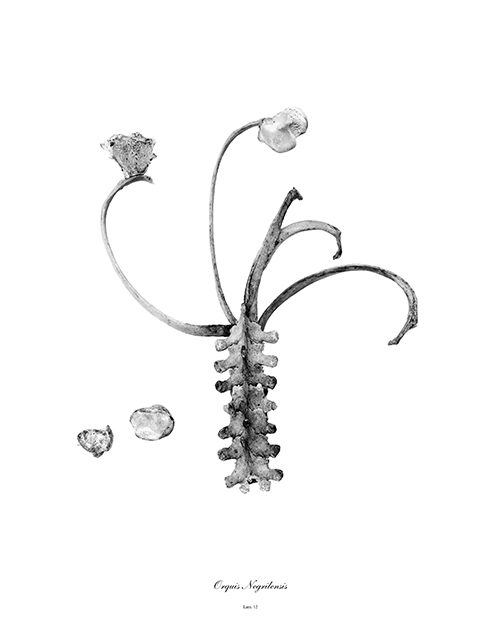 Lying on their bleached-out background, the flowers appear fragile, suspended in midair and ungrounded. They could be flying. The lawof gravity no longer holds. There is a sense of a world on hold, a painful absence of sound. What we see is silence, the silence of something gone awfully wrong with the human world such that we are all, God included, holding our breath, which is probably what happens when you fall a long, long way.

To add to their strangeness, each photograph bears a title like the Latin names used in the plant illustrations of the famous botanical expedition to Colombia organized by the Spanish crown and led by José Celestino Mutis at the end of the eighteenth century. Echavarría is very conscious of this genealogy. In fact he sees his flowers as its latest expression. The difference is that Echavarría’s latinate names are hybrids suggesting the grotesque, one pelvic bone flower being named Dracula Nosferatu, while another flower made of a curved rib with a bunch of metacarpals at one end, suggestive of petals, is called Dionaea Misera. Although these names are in small, discreet letters, names are of consuming importance to this work, beginning with the name of the mutilation — The Flower Vase Cut. The name is crucial because on viewing the mutilated body without the name, I doubt whether an observer would get the point — as we say of a joke — without the name. All the observer would see would be a bloody morass of hacked-off limbs and a limbless trunk.»

excerpt of “The Language of Flowers” (2003), by Michael Taussig