A person is more holy than a land, even a holy land, since faced with an affront made to a person, this holy land appears in its nakedness to be but stone and wood. Emmanuel Levinas.

Josef Koudelka has become a mythical name for photography. A myth not only associated with the quality of his photographic production, but also with the fact that he is a member of Magnum Agency, that influential bastion of documentary photography, which brought him an iconic status of the photographer that is also a hero, engagé et résistante. However, the problems that came to be associated with photojournalism and other types of photography are well known. Not only did television ruin the need for long photographic stories, but the ubiquity of the digital capture is also propelling the extinction of a professional approach to the way photographers document events. Nowadays, what matters is the immediacy of the work, more than its quality or the thought that was behind it. If the photographer owned a certain iconographic power, such power was attributed to him not only for his skills, but mostly due to History’s slow pace. However, History has changed gears; it can do without big narratives (or rather, the media exempt her from such burden), connections and ideologies are lost. The event itself lost its importance in favour of a continuous unroll of events, preferably disconnected from any sort of thread between them abstracting and stupefying  reality.

The point of this prologue is to introduce Koudelka’s recent interview for the New York Times. I came across it via an article by Colin Pantall, where Colin dissects Asim Rafiqui’s hot reaction to Koudelka’s interview. The plot is relatively simple: Koudelka was invited to photograph the wall that separates Israel from Palestine and though he initially refused, we was then convinced to do it (at least that’s what  he says to say). The result can be seen in the book “Wall: Israeli and Palestinian Landscapes”, which serves has a motto for the NYT’s interview.

Koudelka begins by stating that he doesn’t usually do many interviews and in the end he also says that what photographers say about their works is of no importance, which is one of two things, either sharp irony or acute ingenuity, since what is done along the interview is precisely constructing and contextualizing his work, precisely one of the vectors that gives way to the emergency and validity of any photographic work, either one agrees with what Koudelka proposes or not.

And what does he propose? First of all, he seems to tack an understanding of landscape that is worthy of someone who has spent the last decades sleeping under a rock. Landscape as the promise of an experience conveyed by the photographer is nowhere to be seen, unless you think of a touristic phenomenology that usually neglects further reflection about the place. “I hope my book is not about my experience”, Koudelka says, an affirmation that appears here contextualized nevertheless shaping the general discourse about his work .

On the other hand, Koudelka needs facts, more on the surface than at a deep level. Such pragmatism values the optical and descriptive qualities of the image but ignores its subjective and narrative dimensions. In his words: “I don’t like picture stories. In fact I think picture stories destroyed all photography.” Such apocalyptic statement seems to be supported by a belief in photography’s lack of narrative potential. However, and here is the source of some confusion, the potential to tell a story is more a result of the way the photographer explores the medium’s capabilities – how he manages to use it in order to convey the way he experienced the place -, than of the story the image “tells”, since an image can only show facts but not interpretations, and facts without interpretations are of no use other than being mere documents, as the Israeli secret services (or Mr Rumsfeld, btw) could have explained. One might think that stories are also made of the possibility to explain something, but such explanations are precisely what kills the story. Contrary to Koudelka’s conservative beliefs we need interpretations in the form of stories instead of explanations, but all this rant against «stories killing photography» might be a position Koudelka holds towards his colleague Alec Soth (and others?), who might be accused of imploding Magnum with his “crazy” quests about the power of narrative, denoting an intestine battle inside the agency. 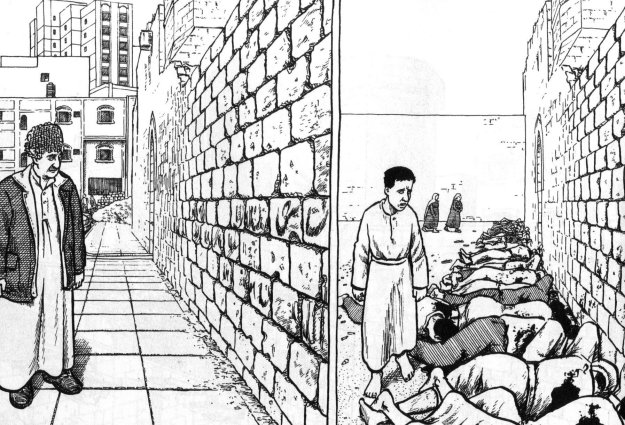 image by Joe Sacco, from Footnotes in Gaza

The remaining questions underlying the building of the wall will have to be disconnected from the images just because the photographer says so and others too. Leaning on third party legitimation to defend his idea, Koudelka says: “What is interesting for me is that I showed these books in Israel and everyone told me this book is not a political book — that this is about man and the place. This book is not about conflict”. In landscape photography there are usually no dead bodies, and as Adorno said «the beauty in nature is history standing still and refusing to unfold», adding the fact that Koudelka seems to not have listened a single dissenting voice, but was it supposed to expect any different answer from the Israeli side? As if in denial, Koudelka seems oblivious to the “implicit” contract he signed, that the images from his book are only another step towards the pervasive necessity of legitimacy from the Israeli state, not to mention the legitimacy of the violence and oppression against the Palestinians, who, nevertheless may also have their share of responsibility in the scenario. If the pictorial side of the landscape is served in the book both ways, from the perspective of its uses and consequences the wall seems to be totally one-sided, a sight worthy of the fiction proposed in Truman Show.

Koudelka is evasive whenever the questions denote a political dimension, putting all the History of engagé photography under a tabula rasa, genre where his images fit and where he is considered a carrier of the humanist approach. In the beginning he says that he would never have gone to those territories, but he did (with a little push, he says…); he also affirms that photographer’s statements are of no matter but he goes on talking about his images – which surely have the formal beauty we are used to see -, almost completely ignoring the reality they represent. At the end, Koudelka says, almost in a glamorous tone, how he dismisses art: “I never use the explanation of ‘art,’ as a matter of fact every time there is the Magnum meeting and they start to talk about art I say: ‘Can we eliminate the word art from the annual meeting? Let’s just talk about photography. What is this art?’”. He might have some reason here, in anthropological terms art and images are different matters but the discourse (and practice) that supports his work in Israel is grounded in the utmost artialization of nature through the use of landscape photography. A landscape given only as a sight, heir of painting, stripped away from use, experience, of any other meaning beyond his private world, “For me it is just enough to look at the pictures.” Unfortunately, such deflection looks like a strategy relegating the focus on the technical and formal capacities of the image (and on authorship, of course…) but not on what they represent. In the end, no more than a modernist position that rests in overall trustworthiness in an understanding of the world through its appearances.

A certain philistine attitude from some photographers, generally supported by the anguish that results from the absence of non-commercial work and of being published at any cost, might lead them to escape the problematic dimensions of the commissioned works, hiding behind the technical aspect of the support, paying homage to the forms but forgetting the content. This sheds a light over Koudelka that could be seen as «give me some money for a book, don’t ask too many questions and it will all be ok», an approach that may be uncomfortable to some of his Magnum partners, with a lesson for future generations that rests mainly on a pragmatic materialism but not much else.

I hope to be mistaken about the romanticism and theatricality of this work about Israel and Palestine. Although we can recognize in the surface of the images their potential to become icons, and so to become triggers for political action – where on the contrary their depth may only unveil falsehoods and selective memories -, Koudelka’s images (and discourse) seem to be of a detached nature which codifies landscape in terms of a romantic and contemplative poetry, a somehow naïf and insufficient approach, concerning a territory and its implications that have been threatening the world peace for far too long.