‘Authenticity’ is a matter of interpretation which is made and fought for from within a cultural and, thus, historicised position. It is ascribed, not inscribed. […] Thus, rather than ask what (piece of music, or activity) is being authenticated, in this article I ask who.

[…] In rock discourse, the term [‘authenticity’] has frequently been used to define a style of writing or performing, particularly anything associated with the practices of the singer/songwriter, where attributes of intimacy (just Joni Mitchell and her zither) and immediacy (in the sense of unmediated forms of sound production) tend to connote authenticity. It is used in a socio-economic sense, to refer to the social standing of the musician. It is used to determine the supposed reasons she has for working, whether her primary felt responsibility is to herself, her art, her public, or her bank balance. It is used to bestow integrity, or its lack, on a performer, such that an ‘authentic’ performer exhibits realism, lack of pretence, or the like. Note that these usages do not mutually exclude one another, nor do they necessarily coincide, and that all are applied from the outside.

[…] For Richard Middleton, any approach to music which aims to contextualise it as cultural expression must foreground discussion of ‘authenticity’, since ‘honesty (truth to cultural experience) becomes the validating criterion of musical value’ (Middleton 1990, p. 127). In rock discourse, this validating criterion is reinterpreted as ‘unmediated expression’, by which is assumed the possibility of the communication of emotional content (inherent possibly in the music itself, but certainly at least in the performance) untrammelled by the difficulties attendant on the encoding of meaning in verbal discourse (Moore 2001a, pp. 73-5; 1814). 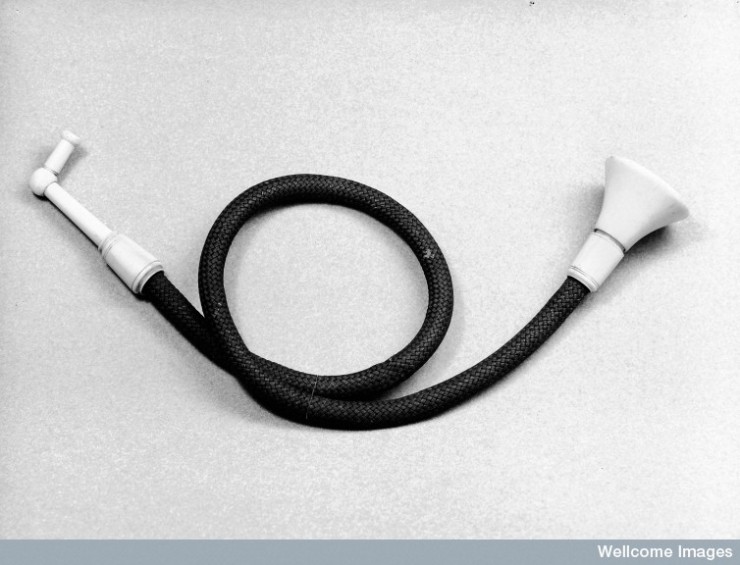 © Wellcome Library, Used by the very deaf to obviate the need for the close approach of the speaker if the trumpet type of hearing aid is used.19th Century.

[…] The expression I am discussing here is perceived to be authentic because it is unmediated – because the distance between its (mental) origin and its (physical) manifestation is wilfully compressed to nil by those with a motive for so perceiving it. This is thus one basic form of the authenticity primality argument put forward by Taylor (1997, pp. 26-8), wherein an expression is perceived to be authentic if it can be traced to an initiatory instance. This argument surfaces most clearly in academic folk discourse. For Philip Bohlman, identification of the ‘authentic’ requires ‘[the] consistent representation of the origins of a… style’ (Bohlman 1988, p. 10), such that ‘When the presence of the unauthentic [sic] exhibits imbalance with the authentic, pieces cease to be folk music, crossing the border into popular music instead’ (Bohlman 1988, p. 11). Thus, for Bohlman, authenticity is identified by a purity of practice, whereas for Grossberg, it is more clearly identified by an honesty to experience – a subtle distinction perhaps, but one which remains potent. Starting from a very different point, Steven Feld develops a similar line, arguing that ‘authenticity only emerges when it is counter to forces that are trying to screw it up, transform it, dominate it, mess with it . . .’ (Keil and Feld 1994, p. 296), equating authenticity to a concept of genuine culture dependent on the anthropology of Edward Sapir. Bohlman’s identification has found its way into rock discourse, in that proximity to origins entails unmediated contact with those origins: ‘Real instruments were seen to go along with real feelings in Springsteen’s rise: a certain sort of musical and artistic purity going hand in hand with a sincere message’ (Redhead 1990, p. 52). The constructed nature of this interpretation is clarified by comparison with Bob Dylan – in order to achieve the same result in his early work, the ‘real instruments’ he had to employ had not to be amplified, contra Springsteen.

Walser (1993) insists that this is one of two clear types of ‘authenticity’ that can be observed in rock in general, wherein technological mediation (whether a reliance on signal modifiers, ever more powerful means of amplification, and even technical mastery in many spheres) is equated with artifice, reinstating as authentic/inauthentic the distinction between ‘vernacular’ and ‘trained’ or ‘professional’. There is thus a relationship here with an alternative category developed by Taylor, which he terms authenticity of positionality (Taylor 1997, pp. 22-3). Through this, he identifies the authenticity acquired by performers who refuse to ‘sell out’ to commercial interests. Weller exemplifies this again, as do Taylor’s examples of non-Western musicians involved in ‘world music’ – for such musicians, ‘selling out’ appears to equate to ‘sounding like Western musicians’, i.e. by adopting the style codes of pop/rock (which codes, in such an analysis, would be seen as inherent within the individual rather than open to appropriation. (see Moore 2001b)

[…] What unites all these understandings of authenticity is their vector, the physical direction in which they lead. They all relate to an interpretation of the perceived expression of an individual on the part of an audience. Particular acts and sonic gestures (of various kinds) made by particular artists are interpreted by an engaged audience as investing authenticity in those acts and gestures – the audience becomes engaged not with the acts and gestures themselves, but directly with the originator of those acts and gestures. This results in the first pole of my perspective: authenticity of expression, or what I also term ‘first person authenticity’, arises when an originator (composer, performer) succeeds in conveying the impression that his/her utterance is one of integrity, that it represents an attempt to communicate in an unmediated form with an audience.