© Adam Lach, Wroclaw 10.03.2013 Poland. Roma girl, Karolina. Karolina escaped from her parents home (from different part of Poland) because of big love to Alex, one of the slums inhabitant.

© Adam Lach, Wroclaw 29.06.2012 Poland Roma woman, Malena with a cigarette. Malena dreams to go to Berlin – she is estranged from family.

Adam’s statement: It is easy to fight for the rights of people who shout out loud in protest. It is much more difficult to notice those who do not manifest openly. The Stigma Project tells the story of the 60 -member family of Romanian Roma, living in an encampment on the outskirts of the city of Wroclaw in Poland. But this is not another chapter of a colorful Gypsy legend, to which the Roma community is often wrongly classified. Limiting the photo sessions to the location of the Dog Field – the district of Wroclaw occupied by the Roma slums – I deprived the recipient of the opportunity to observe the Roma people during what is commonly considered to be their everyday life – begging and theft. Surrounded by family, separated from the rest of society, they turn out to be completely different people, unfitting the conventional ideas. There are no typical camps with campfires, songs and spells – instead, there are good people with unusual interior and dramatic life stories, hurt by many whom they met on their way. They struggle not only with severe everyday life, but also with the city authorities and neighbors. They have a reputation of being beggars, thieves and crooks, among the local inhabitants, which causes frequent acts of aggression against them. All the actions of municipal authorities, with a view to solve the Roma problem, are leading to attempts to intimidate and evict them.
This story of the Roma, is primarily a story about family, relationships and emotions of people, who despite all, seem happy and peaceful. It is also an attempt to analyze the condition of the modern family, on the border between tradition and modernity. This group of nomads , dependent on the constant search for a better world , unconsciously surrenders to the influence of mass culture, struggling with the same concerns as any modern man. 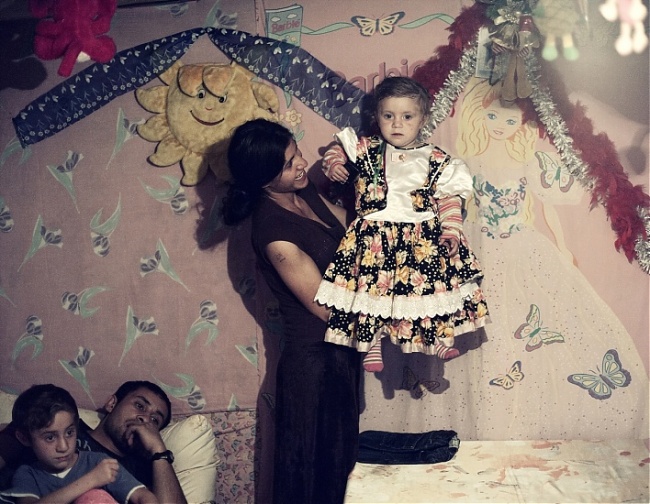 We can distinguish two changes that have together made the modern preoccupation with identity and recognition inevitable. The first is the collapse of social hierarchies, which used to be the basis for honour. I am using “honour” in the ancient regime sense in which it is intrinsically linked to inequalities. For some to have honour in this sense it is essential that not everyone have it. This is the sense in which Montesquieu uses it in his description of monarchy. Honour is intrinsically a matter of “preferences.” It is also the sense we use when we speak of honouring someone, by giving her some public reward, say the Order of Canada. Plainly this would be without worth if tomorrow we decided to give it to every adult Canadian.

As against this notion of honour, we have the modern notion of dignity, now used in a universalist and egalitarian sense, where we talk of the inherent “dignity of human beings,” or of citizen dignity. The underlying premiss here is that everyone shares in this. This concept of dignity is the only one compatible with a democratic society, and it was inevitable that the old concept of honour be marginalized. But this has also meant that the forms of equal recognition have been essential to democratic culture. For instance, that everyone should be called Mister, Mrs, or Miss, rather than some people being called Lord or Lady, and others simply by their surnames, or, even more demeaning, by their first names, has been thought crucial in some democratic societies, such as the U.S.A. And more recently, for similar reasons, Mrs and Miss have been collapsed into Ms. Democracy has ushered in a politics of equal recognition, which has taken various forms over the years, and which now has returned in the form of demands for the equal status of cultures and of genders.

But the importance of recognition has been modified and intensified by the understanding of identity emerging with the ideal of authenticity. This was also in part an offshoot of the decline of hierarchical society. In those earlier societies, what we would now call a person’s identity was largely fixed by his or her social position. That is, the background that made sense of what the person recognized as important was to a great extent determined by his or her place in society and whatever role or activities attached to this. The corning of a democratic society doesn’t by itself do away with this, because people can still define themselves by their social roles. But what does decisively undermine this socially derived identification is the ideal of authenticity itself. As this emerges, for instance with Herder, it calls on me to discover my own original way of being. By definition, this cannot be socially derived but must be inwardly generated.

excerpt from Charles Taylor, in The Ethics of Authenticity.