Trying to make a point with digital cut and paste, here are excerpts of reviews and interviews with collage artist Kalen Hollomon, accompanied by images of his playful work.

NYMAG: […] Hollomon claims it’s been “embarrassing” to take the iPhone photos that garner him thousands of likes each day and says he’s not interested in deconstructing materialism — “I love the price of things!” Instead, he seeks to create “sexy, but unsettling” combinations of men and women. […]

Alex Ronan: What is it about high fashion interests you?

Kalen Hollomon: I get to force the collaboration that happens between the designer and the person wearing the clothes. I used a photograph of a homeless man, gave him a pair of heels, and added the world Chanel. Suddenly, the guy looked fabulous. That’s what fashion does. 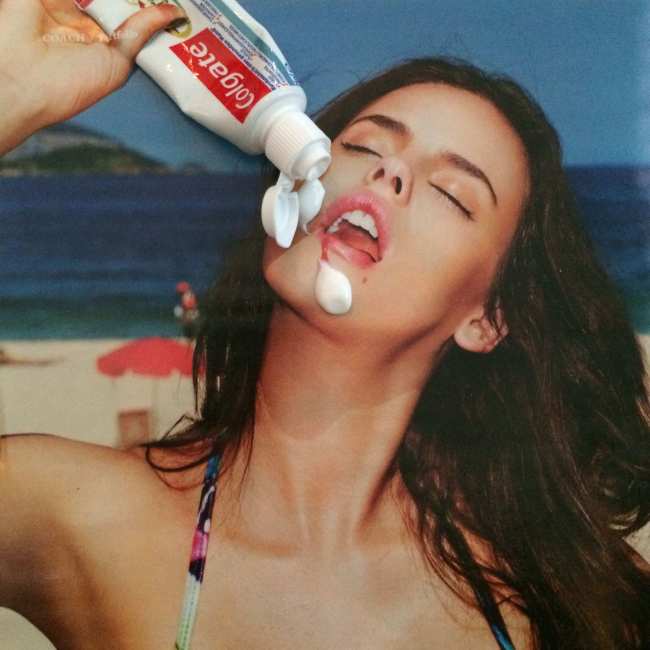 DAZED: The unorthodox and taboo are thoroughly explored through New York-based artist Kalen Hollomon’s tongue-in-cheek collages, which seek to blur the boundaries of prefixed homogenisation permeating our society. Hollomon’s subjects range from subway riders juxtaposed with clippings of cut out nudes and unassuming street-goers superimposed onto Celine, Prada and Chanel advertising, which sell for $300 a piece. “I am always concerned with what lies beneath the surface – with relativity, perception, sexuality and pop culture,” says Hollomon. “My images are reality manipulation, manipulating other people’s identities. The idea of and ability to alter the value or meaning of an image or object by adding or subtracting elements is really exciting to me – adding or taking away elements from something until it becomes the sexiest it can be at that moment.” […]

THE EDITORIAL MAGAZINE: Kalen Hollomon (@kalen_hollomon) is taking collage to New York City’s streets and its underground, superimposing clippings from fashion and vintage porno magazines onto unsuspecting subway riders and mundane city scenes. […] It’s clear that many of the people don’t even notice they are getting their picture taken – who can really tell the difference between someone snapping a pic or playing candy crush during their commute? It’s that candidness that lends these images their power, and by mixing in collage, Hollomon adds a surreal wit to this new genre of social-documentary photography. His photos are really funny, especially the ones where he superimposes naked butts onto unassuming pedestrians, creating the same simple absurdity as that Kids in The Hall “Headcrusher” skit where Mark McKinney squints his eye and squishes people’s heads between his thumb and forefinger. […]

Whitney Mallett: But you’re both remixing fashion imagery in a way [reference to Joel Kyack]. Do you see collage as having a radical or disruptive potential?

Kalen Hollomon: I try to create something that looks beautiful. You can create a powerful image that at first looks nice and maybe is a bit funny but if you look a bit deeper, it also might have something more to say than that. And to make someone question like, why they find it attractive, for them to say, “this looks great but wait it’s weird, I shouldn’t think this looks attractive, but I do.”

Cedar Pasori: What intrigues you about combining the past and the present with your art?

Kalen Hollomon: It’s the potential to alter perspective or perception of both the past and the present. If it was sexy then, it’s sexy now. There’s maybe a different presentation, but there’s still that feeling, and it’s exciting to see past and present interact with each other.
[…]

Cedar Pasori: In drawing out “what’s beneath the surface” with your work, how do you aim to do this with men’s style and masculinity, specifically?

Kalen Hollomon: I try to celebrate masculinity and at the same time make it sexy in a feminine way — a type of non-aggressive masculine sexuality. I’m attracted to achieving this with minimal changes, something as simple as putting a pair of heels on a gentlemen; that can really change the vibe of an image.

THE STANDARD: […] Hollomon’s is a brilliant and timely innovation, one that seamlessly merges high and low to maximum WTF effect, and subversively undermines our ordered sense of reality. Seemingly effortless, a closer look reveals a methodical, canny eye for composition, a surrealist bent, and a cutting wit. The result has been a steady buzz in both the Art and Fashion worlds, and 70,000+ followers who get a kick out of his trickery. […]