When I first saw Gregory Crewdson’s photographs, roughly 10 years ago, they didn’t appeal to me. Aesthetically, they still don’t. Throughout the years, in classes and other events, there were various encounters with his lynchian universe, but my immediate reactions weren’t changed and beyond my interest in some of the technical issues called forth by his process, I never gave it much chance. Having said this, two pictures stayed with me: one being Ophelia, and the other Woman in Flowers (sew below). I now admit they may have influenced me further than my conscious will admit. 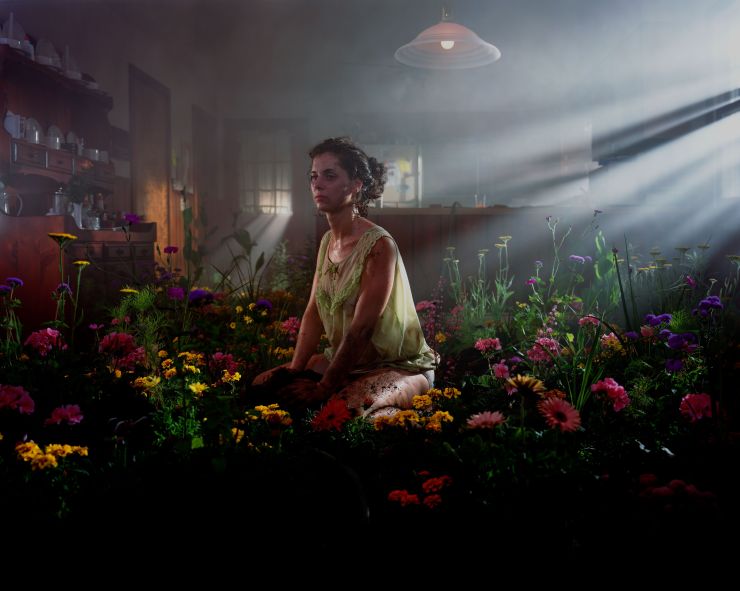 What I disliked about Crewdson’s work (and still do) is his perfection: his absolute attention to detail and obsession with the authenticity of the sceneries; the meticulous control of light; the repetition of a cold, dark, old and decadent human figure. All this amounts to such a perfect theatricality that the realm of reality (and that of imagination) is excluded from the picture: that which is supposed to enclose all the possibilities.

Errors, slips, and an overall lack of control, do not participate in Crewdson’s work, even if he feels otherwise. And because of this perfectly staged theatricality, and although every single image is grounded on an open narrative, I feel stuck in is visual language, stuck in his interiority, and unable to relate to his anguished subjects, with whom I should easily empathize.

New fact: I changed my mind about Crewdson after recently having watched Ben Shapiro’s documentary Gregory Crewdson: Brief Encounters (2012). Although I still find no punctum in Crewdson’s photographs (his latest work in Cinecittà being an exception), now I can contemplate the man who authored such a work. Does this affect my relation with the photographs themselves? Well, yes and no.

The documentary follows Crewdson during the making of his biggest project to date – Beneath the Roses (2002-2008) – which is intercalated with an autobiographical account that helps contextualize his artistic sensibility. This narrative directly relates and immediately adds to the deeper layers of the photographs, yet my eye is still  caught in his perfectly absent encompassing of human lives in their everydayness.

Formally, the vivid use of colors, the sharpness of architectural elements and the rigidity of the framing, all accentuate the drowning of the image into itself, obliterating one of the major specificities of the photographic medium: that a photograph is a surface. A surface that is able to show (and mirror) the surface of things, and in doing so, being able to trigger a dive into as many imaginary layers as one can think of.

Jeff Wall, who uses theatricality in a completely different way, to whom the absorptivity of the subjects within the image is crucial, is an important reference for Crewdson. And although Wall has a highly coherent body of work, some of his photographs are less successful than others. The image below, Insomnia, is a good example of how the performative nature of theatricality can take over an image and ruin the art of deceiving that is so intrinsic to theatricality, open narratives and imagination.

Wall is famous for his concept of “Near Documentary”, namely, the ability to enact and capture an event to the point that it looks naturally occurring. But in this particular photograph there’s none of that. Instead, there is too much stillness, no dynamics, a lack of credibility and an uncomfortable proximity between the eye of the camera and that of the insomniac man under the table. The perspective, particularly the way the cabinets stumble upon the framing, not only exposes the stage (which wouldn’t be a problem per se), but also confine our attention to such staginess, disrupting our empathy with the simplicity of the everyday drama depicted in the picture.

This staginess I was referring to can be encountered in Crewdson’s work. Both the images below can serve to illustrate how now and then he seems to loose perspective and give us nothing but the stage: the sceneries, the actors, the performance, the lights, the camera, and no action. An alienated representation of a theatrical moment between takes. 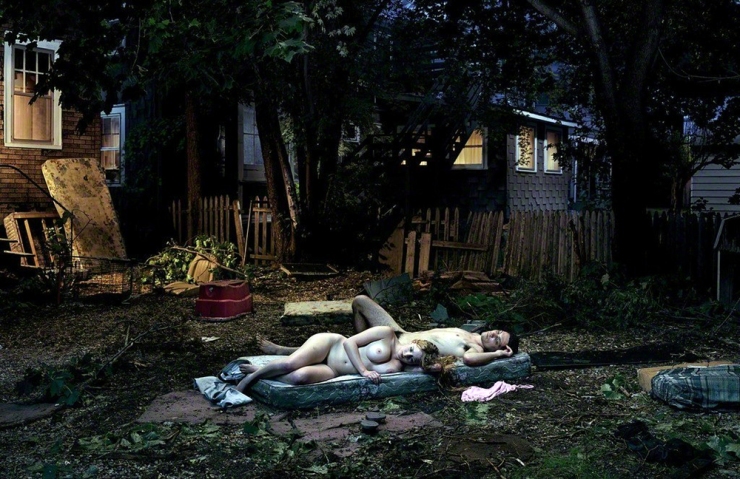 At one point in the documentary, while we’re showed the image just above, Crewdson says: “My pictures are a moment between moments, really. And, I think twilight is sort of a beautiful kind of metaphor for that.” As implied before, I am unable to comprehend how can this be a moment between an imaginary before and a possible after, because there is no sense of time, no account for the present tense or untimely beauty: the figures lack an overall engagement with the atmosphere, each other or the image itself, and end up being overshadowed by the choices of framing and their bodies position. Oddly enough, Crewdson’s Untitled (The Back Yard Romance) reminds me of Jan Saudek, who mastered the art of photographing people performing love and sexuality. And on that note, here’s one of Saudek’s pictures that came to mind.