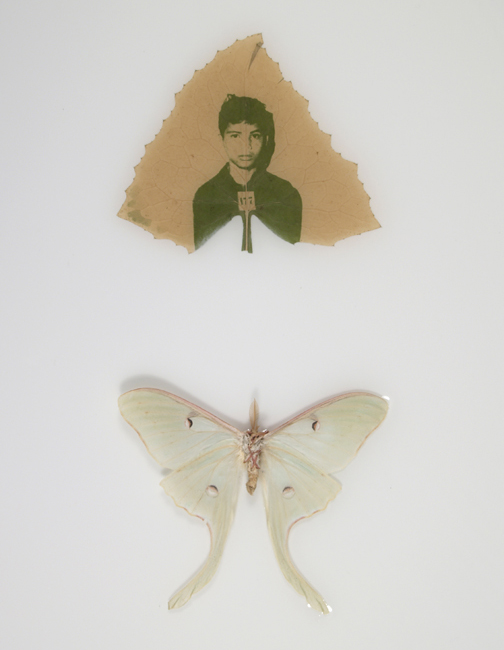 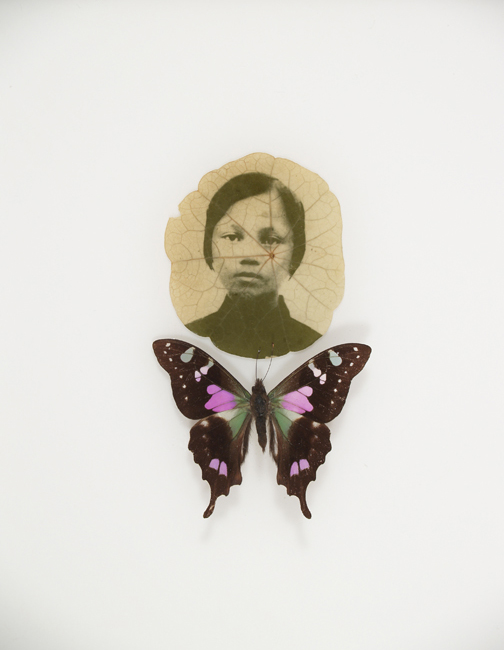 In Michigan Quarterly Review (Volume XLIII, Issue 4, 2004), John Schafer writes about Binh Danh’s intertexual images before going on to recount how he experiences Vietname (Danh’s birthplace, 1977) through iconic war photographs, despite having lived there 4 years during the war:

«Literary critics emphasize that stories and poems are intertextual. When one reads, one hears what Roland Barthes called “off-stage voices,” references to prior texts. Visual “texts” are also intertextual, of course. Binh Danh’s images are striking in part because they are so vividly and concretely intertextual. Within each leafy image is a photo that we have seen already — maybe not the exact photo we know but one like it. How we react to his images depends on our experience with the earlier photos and on how we see the text of the photo interacting with the text of the leaf.»

Schafer sees Danh’s leaves as a place where history is given a chance for truce, in which pictures of suffering, violence, and death are enshrouded by the greenness of life and hope, but he also recognizes in them the power to convey a special message about the way civilization deals with nature, and I would add the way history affects memory and vice-versa:

«Binh Danh’s works, like the plants they are printed on, are produced by photosynthesis, the same process that the U.S.’s defoliation program was designed to inhibit. Evidence suggests that Agent Orange, one of the agents used to defoliate, has caused illness, birth defects, and chromosome alterations. In peacetime too, humans out of greed or ignorance often destroy nature and render it unable to hold us in its protective grasp. In Binh Danh’s works, however, images of human suffering are cradled in the hand of nature.» 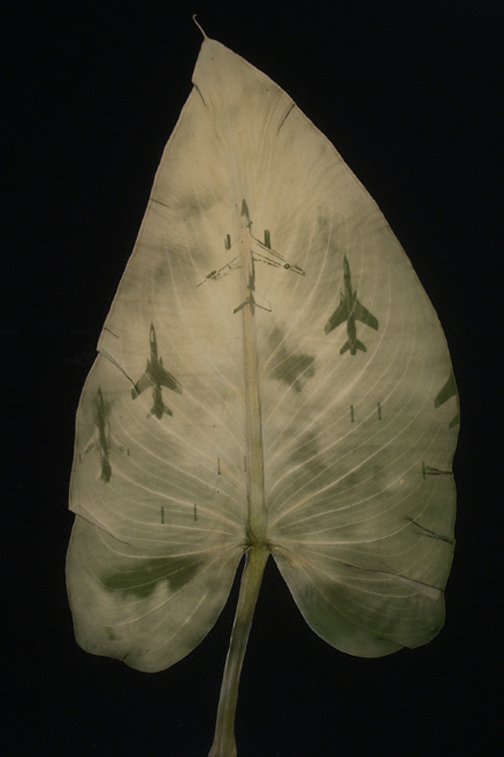 © Binh Danh, Shock & Awe, 2008. Chlorophyll print and resin, from the project Immortality, The Remnants of the Vietnam and American War. 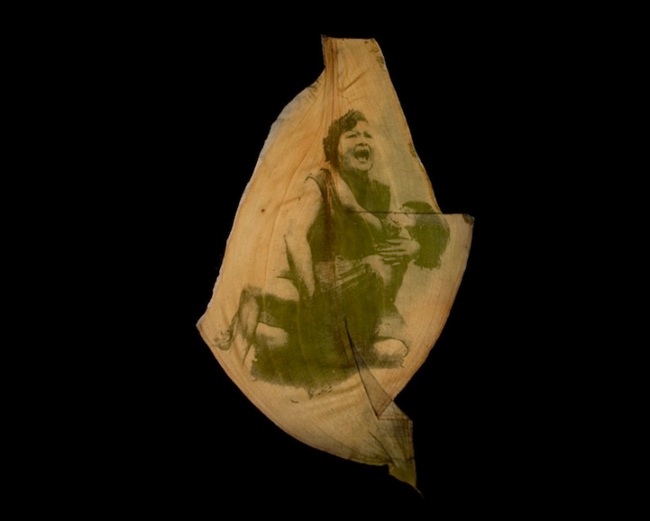 © Binh Danh, Mother and Child, 2005. Chlorophyll print and resin, from the project Immortality, The Remnants of the Vietnam and American War. 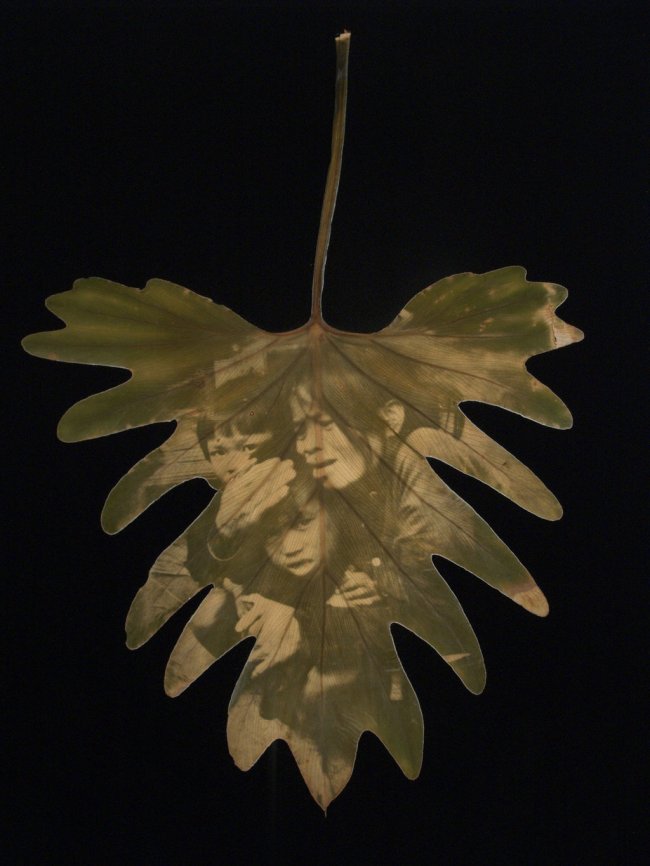 © Binh Danh, Ambush in the Leaf #4, 2007, from the project Immortality, The Remnants of the Vietnam and American War.

In the context of an exhibition held at SOMArts in 2012 entitled The Future Is NOW: Asian America on, Its Own Terms, Danh told interviewer Corinna Karg how photography is always dealing with death, resurrection, memory, nature and rebirth:

«When I was looking at pictures of the war, photos of civilians being wounded or killed saddened me. I imagined as they are bleeding and possibly dying, their essences sank into the ground and the memories of the event join with the landscape. For me, a photograph is always a picture of the past, but that past lives in the present moment when the image is resurrected in ourselves by the pure act of us looking at the artwork.

We could use photography to meditate on themes of death, resurrection, history, landscape, time, and our collective memories. For me looking at the pictures of war and especially those on leaves, I understand that death is within reach and life is fragile. It is acknowledging that we will die at any moment makes our lives more meaningful. And when it does happen, we know that we ultimately become part of nature. I hope the viewers are able to form narratives about the Vietnam War. Why people were leaving the country during and after the war? And as a result, Vietnamese communities formed through out the world.»

and the conversation goes on…

«How did you arrive at the technique of printing on leaves trough photosynthesis, and what made you later transition to daguerreotype?

One summer, I was motivated to experiment with photosynthesis and its pigments after watching the lawn change color due to a water hose that was placed on it. Soon after that observation, I was making chlorophyll prints. For the past 5 years, I have been making daguerreotype, a 19-century photographic process. I have taken a historical process and applying it to a contemporary theme. A study of photo-history is a study of humanity. Time and space are recorded for future evaluation and studies. Photography became a process that changes the way we record history, no longer just use words but images too. I love the quality of the daguerreotype, the reflective surfaces. The viewer becomes part of the artwork as the view the photograph.

Are the tropical plants you use in your chlorophyll prints Vietnamese or American plants?

They are plants grown in my garden.

Why did you choose something organic, like the leaves, as a canvas for images of something man-made, like war?

This process deals with the idea of elemental transmigration: the decomposition and composition of matter into other forms. The images of war are part of the leaves, and live inside and outside of them. The leaves express the continuum of war. They contain the residue of the Vietnam War: bombs, blood, sweat, tears, and metals. The dead have been incorporated into the landscape of Vietnam during the cycles of birth, life, and death; through the recycling and transformation of materials, and the creation of new materials. Since matter is neither created nor destroyed, but only transformed, the remnants of the Vietnam and American War live on forever in the Vietnamese landscape. This body of work addresses this continuum.» 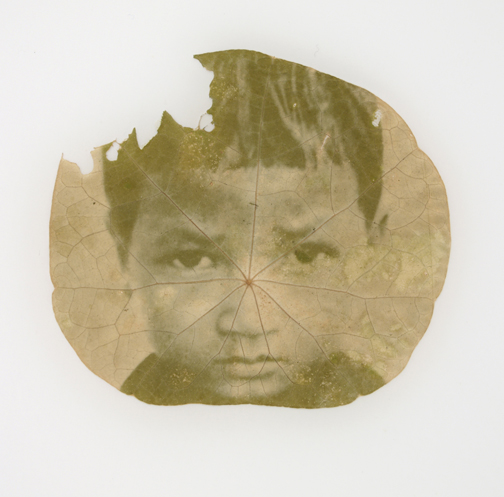 © Binh Danh, Memory of Tuol Sleng, child 3, 2008. Chlorophyll print & resin, from the project In the Eclipse of Angkor. 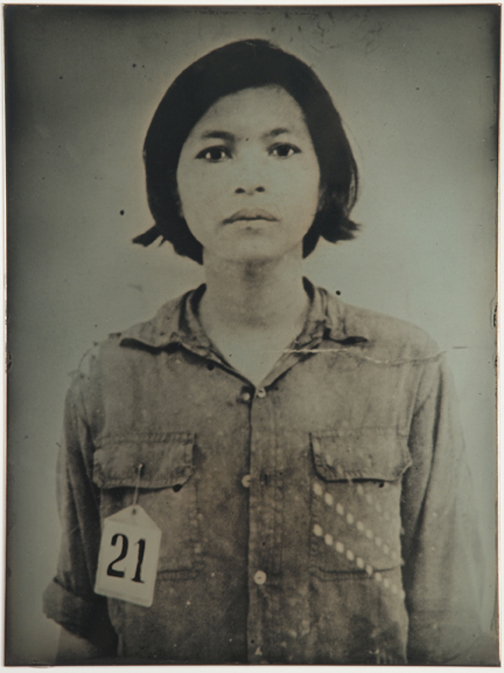 © Binh Danh, Ghost of Tuol Sleng Genocide Museum # 2, 2008. Daguerreotype, from the project In the Eclipse of Angkor. 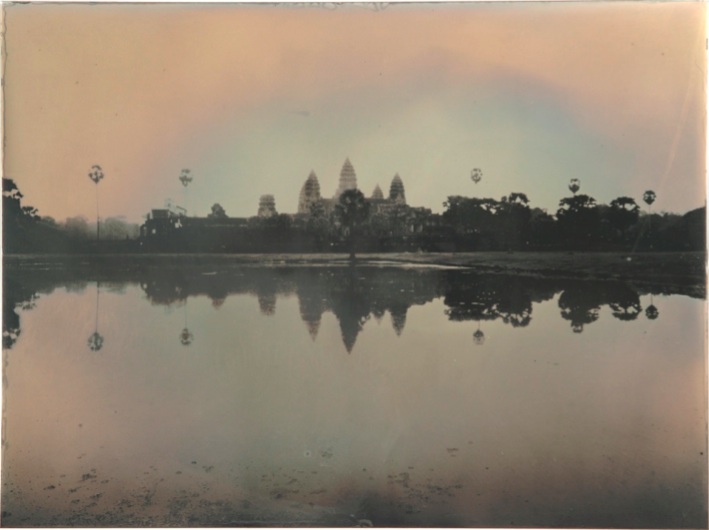 © Binh Danh, Angkor Wat, 2008. Daguerreotype, from the project In the Eclipse of Angkor.

The Eclipse of Angkor is Danh’s work that shines a light to the victims of the Khmer Rouge, who were executed in Cambodia’s Tuol Sleng prison. Writing about this project, Max Weintraub (art21 Magazine, 2010) reflects on the artist’s relation to events he remembers only through photographs, such as the Vietnam War or the Cambodian genocide. For this project, Danh rephotographed archival imagery which was then reprinted as chlorophyll prints and daguerreotypes. Weintraub writes how the body of work constitutes more then a haunting index of systematic genocide:

«But Danh’s distinctive photographic processes and prints also transform the images into something more. Incised on a shimmering plate of metal or into a delicate leaf, each portrait becomes part relic and part photograph, and is invested with a powerful presence. It is no coincidence that both of the photographic processes Danh employs are time-consuming, complex methods that generate unique prints. By re-photographing images of anonymous victims of mass genocide using photographic processes that generate unreproducible images of extraordinary detail, Danh’s chlorophyll prints and daguerreotype plates restore a sense of individuality and intimacy to the victims depicted in the Khmer Rouge portraits. In addition, the extraordinary surfaces of Danh’s prints, as indexes of the time and great care required to produce them, invest the portraits with a significance and uniqueness that offsets the detached, bureaucratic objectivity of the original photographs.» 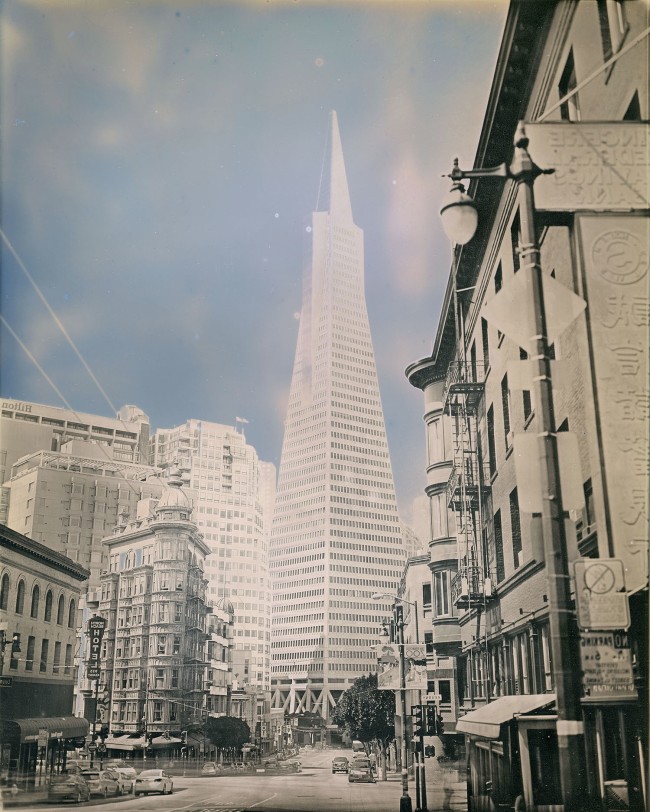 © Binh Danh, The Transamerica Pyramid, 2014.  Daguerreotype, Unique (in camera exposure), from the project This, Then, Is San Francisco. 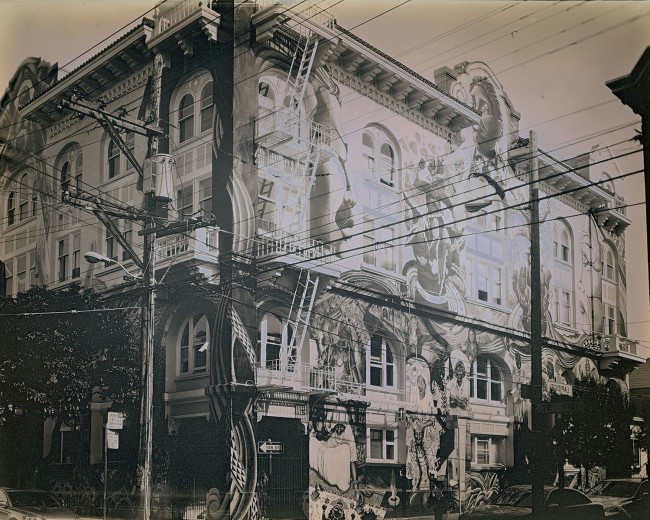 © Binh Danh, The Women’s Building, 18th Street, 2014. Daguerreotype, Unique (in camera exposure), from the project This, Then, Is San Francisco. 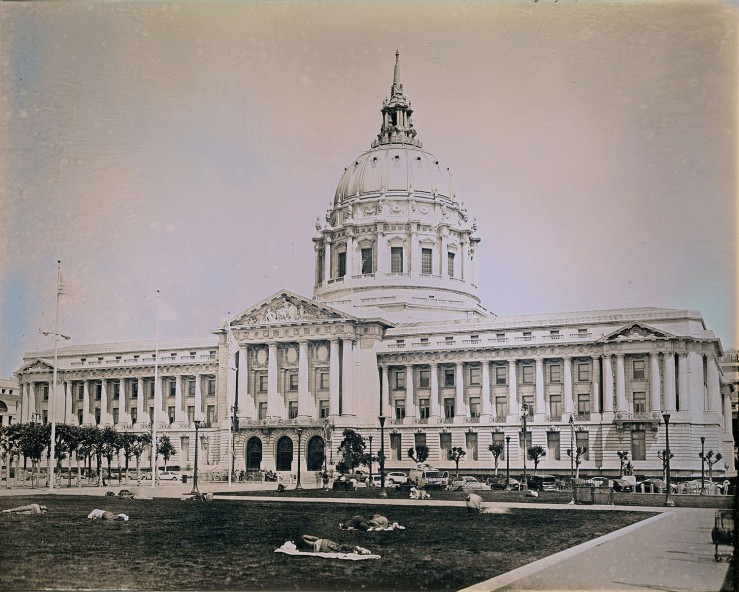 © Binh Danh, San Francisco City Hall, 2014. Daguerreotype, Unique (in camera exposure), from the project This, Then, Is San Francisco.

Pete Brook, from Prison Photography, talks with Danh on account of yet another one of his impactful works, namely This, Then, Is San Francisco. They speak about the political nature of the work and how form and content are always conceived as a unified element is his work. Danh explains that “[t]he daguerreotype results in a reverse image. So, the cityscape is familiar but it’s odd. I like the uncanny.“ 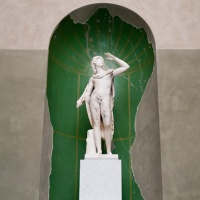 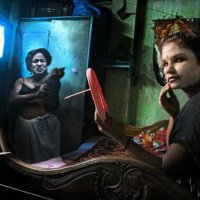 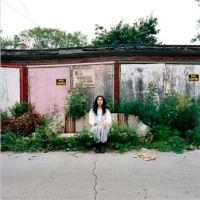 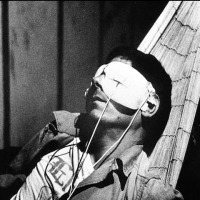 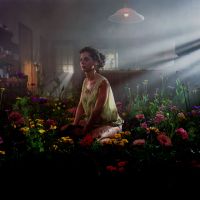