Antonio Pedrosa is a portuguese photographer whose work has been highly recognized, both by his national peers as well as by international entities, such as Hasselblad. In my opinion, prizes do draw attention to the award-winning authors’ work, and they do guarantee quality, but everything else is extremely subjective. Pedrosa won the prize ESTAÇÃO IMAGEM MORA for a project he called Iraq Slum. His statement:

“Bairro do Iraque, Iraq slum, is located in the north of Portugal. Until the late 90’ this 100 persons community of gypsies lived moving from village to village working in basketry, utensils for horses and other small jobs. With the end of traditional agriculture also their traditional way of life finished. When the TV news were full of images from the second invasion of Irak, this community was expelled from the center of town moved to an old German mine of tungsten transformed in construction materials dump, abandoned in the Second World War- know now as Iraq slum. The old structures are occupied and fixed with the recycled materials from the dump. Electricity is stolen from public electric poles; light just appearing after the sun goes down in the horizon. The members of the community live from social metal scavenging, farm work, raising animals for selling and the social security check. The walls of the shelters are not enough for protecting these families from the cold and wind.”

It’s a project I empathize with. The dark mood, the rich and profound shadows, the melancholic looks, the play, the fact that I am reminded of Roger Ballen’s work… it all seems to confirm the honesty of the work. But although Pedrosa says this work is never finished, that every time he goes to Carrazeda de Ansiães he visits the “slum”, the work dates back to 2011/2012 and is inherently different from the body of work that brought me to this post: The Pose and the Prey. 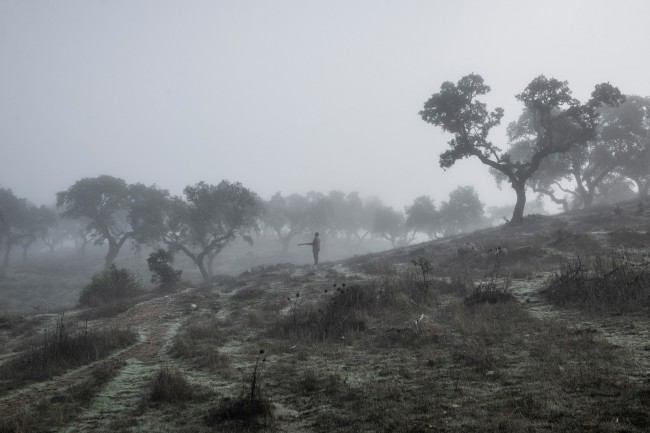 © António Pedrosa, In the early morning Carlos Ferreira waits, from the series The Pose and the Prey.

© António Pedrosa, A running herd of deer, February 2014, from the series The Pose and the Prey.

© António Pedrosa, Ana Parreira, tracking dog handler, from the series The Pose and the Prey.

I stumbled upon this work with a different title, namely Beauty amid the beasts. It had been recently featured in Captured, The Week photo blog. It’s a work about hunting and hunters in Portugal, a tribe Pedrosa describes as “a threatened species by aging and loss of economic power caused by the crisis in the South of Europe.” Of course, this is highly debatable, there is a dramatic change in our behaviors and mentality regarding animals and nature that is at the core of what is described as a “disappearing tradition” by editor Sarah Eberspacher, from The Week. Pedrosa’s statement about the series goes as follows (with links provided by the editor aforementioned):

“Hunting in my imagination was always more taxidermy photograph as if the prey was just a mere accessory of the hunter’s pose – the real trophy.
When I decided to document the daily lives of Portuguese hunters came instantly to the memory the “cliché” from the photographer JA da Cunha Moraes, captured during a hippopotamus hunt in the River Zaire, Angola, and published in 1882 in the album Africa Occidental . The white hunter posed at the center of the photograph, with his rifle, surrounded by the local tribe.
It was with this cliché I got to Alentejo, south of Portugal, in search of the contemporary hunters. For several months I saw deer, wild boar, foxes. I photographed popular hunting and private hunting estates, wealthy and middle class hunters, meat hunters and trophy hunters. I photographed those who live from hunting and those who see it as a hobby for a few weekends during the year. I followed the different times and moments of a hunt, in between the prey and the pose , wine and blood, the crack of gunfire and the murmur of the fields.
I was lucky, I heard lots of hunting stories. I found an essentially old male population, where young people are a minority. Hunters, a threatened species by aging and loss of economic power caused by the crisis in the South of Europe.
The result of this time is this series of images, distant from the “cliche”, from 1882.”

© António Pedrosa, “Berras” pulling the slaughtered boar for a visible area for better picking, from the series The Pose and the Prey.

© António Pedrosa, Dogs in pursuit of a deer, from the series The Pose and the Prey.

© António Pedrosa, José Pinguelo climbing the escarpment with the head of a deer, from the series The Pose and the Prey.

It’s clear to me that Pedrosa went for the hunt with a cliché in mind, but it wasn’t Moraes trophy photography, instead an idea about what the pictures would look like. Sarah quotes him saying “It was that medieval view, that I’ve experienced in hunting paintings, that I wanted.” By that medieval view he seems to be referring to, and here quoting the same source, “Men with huge knifes in the belt, and the hunting dogs running toward the rifle hunters”. The article also emphasizes the economic crisis behind the changing tradition, alluding to the “money to maintain a gun license, secure a place in the hunting grounds, and even drive out into the tangled, unsettled areas where the deer and boars roam.”

I’ve grown up watching this tradition unfold. My father is a hunter and while growing up we got used to him waking up at three or four in the morning to meet his accomplices and drive to Alentejo. Their hunting grounds changed over the years for several reasons but the journey was never short. We got used to see the trophies around the house but never really got used to the obvious connection between the way hunters deal with their preys and the animals in their domestic environment. Hunting, as a hobby (not a surviving skill), is an attitude that goes beyond the hunting grounds.

But back to what brought me here: Pedrosa’s photographs. At first I was amazed by how different his work is in color. There’s an elegance, a subtle dramatic approach that is lost, even if there’s a stylistic approach that favors low saturation and contrast, the use of wide angle lens, the impressionistic skies and the romantic approach to portraits seem to accentuate the view of the photographer as an outsider without a point of view. Maybe I’m being too harsh, it wouldn’t be a surprise, and I find it difficult to pint point what I dislike about this work, but there’s something about the stylistic approach that tends to overpower the photographer’s point of view.

© António Pedrosa, At the end of day collecting hunted deers and fawns in a private estate, from the series The Pose and the Prey.

© António Pedrosa, Hunted deer on hold for review by the veterinary team, from the series The Pose and the Prey.

© António Pedrosa, Hunting landscape, from the series The Pose and the Prey.