I’ve been meaning to watch this for some time, but was lacking the courage, until today. I knew I would be troubled and conflicted about the project, so I was struggling to decide whether I should even see it, to begin with. A friend’s description of the movie was what made me sit still, for 2 hours, and finally watch it.

The project in question is The Act of Killing, by Joshua Oppenheimer and a crew that, in part, needs to stay anonymous, for safety reasons. Legends like Werner Herzog and Errol Morris were part of the producers’ crew. I knew little about Indonesia’s history and, in that sense, this movie was very successful in helping me connect the dots between some of the most violent acts done by men in the 20th century, where the presence of capitalism, and the USA’s standards of entertainment and consumerism, in particular, have been highly influential. Alex Woodson’s review of The Act of Killing manages to give us a clear portrait of the historical context that paved the way for what we now see as contemporary Indonesia. A brief resumes follows:

The Indonesian anti-communist purge of 1965-1966 is perhaps the least-studied and talked-about political genocide of the 20th century. The killings began after a failed left-wing coup in 1965, when members of the so-called 30 September Movement assassinated six Indonesian army generals and announced that they had taken President Sukarno “under their protection.” The army quickly suppressed the coup and launched a killing spree of alleged communists, whom they blamed for the coup (…) The army outsourced the work to local gangs and militias, including the massive and still-active Pancasila Youth paramilitary organization, and within a year, at least 500,000 people (with some estimates placing the number up to 3 million) had been murdered and more than 1 million more were imprisoned.

To tell the stories of the death squads, the director had the executioners and their younger sidekicks reenact some of their murders in whatever way they wanted. As the gangsters are big fans of American movies (they were actually called “movie theater gangsters” in the 1960s and ran a business scalping tickets to American films), the stories were told using Western, mafia, and horror movie motifs—each set more ridiculous than the next. (…)

Anwar Congo, the main storyteller of The Act of Killing, not only reenacts some of his killings, he also analyses some of the footage that Oppenheimer shows him, then commenting on what he thinks should be done to make the movie “more realistic”. At some point, Congo says that as a young man he was very influenced by american cinema, by a particular kind of gruesome gender and that when committing the murders they tried to be even more cruel. When reading about the movie, I’ve often come across reviews that describe Congo as a sympathetic character, that feels guilt and repents, but I can’t really support that. We, as spectators, have the responsibility to help the movie go on to do what it is supposed to do. We’re not passive, neither should we think of Congo as a character, because he is not. Is he sincere when he acknowledges the guilt? Isn’t that but a word? Can we really discern between the man and the character? What we know as a fact is that he is a mass murderer, who has been able to distance himself from his doings to a point that he now talks about the killings as if they were just another scene in a plot where he plays the main character. Does this mean Oppenheimer shouldn’t have done the movie? Not in my view. 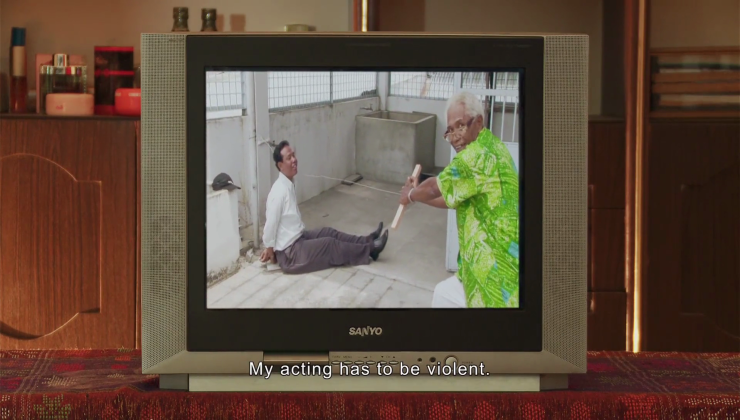 I think is when Congo criticizes his performance as an actor that we have a glimpse of a conscious. When he says things like “My acting has to be violent” or “I shouldn’t be laughing” I’m reminded of another scene, from Yann Arthus-Bertrand’s Human, where we hear a former american soldier named Peter say that killing is addictive. In his own words:

One of the most impactful things that will occur, after being in combat, is the feeling of killing another human being. Once you’ve experienced it, you’ll see that it’s not like anything else that you’ve experienced before. And unfortunately, that feeling, your body will want to experience again. (…) I yearn or desire for someone to try to hurt me or to break in or to give me an excuse to use that violence against somebody else again.

Humanists would likely describe this sort of doing as “lacking humanity”, but is that the only way to understand this? Couldn’t that choice be reproducing the same exact failures that we identify in those who kill? Maybe humans like Congo “lack humanity” because when they go on to take their neighbor’s life they are rejecting some of the qualities that make them human: namely conscious and reason. But could we really say they lack reason and conscious if they still make choices and decide who to kill and who not to kill, if they discuss what is fair and what’s right? Doesn’t Peter, apart from his willing to kill again, still waits for “a reason”? Congo describes the time when he did the killings as a time when he was free, so maybe freedom for him is about acting on his instincts and denying responsibility for the consequences his actions have on others. In that sense, could the consequences of being haunted by his past be imprisonment enough?

Talking with Christopher Campbell, director Joshua Oppenheimer tells about some of the ethical dilemmas that challenged the making of this movie:

My biggest dilemma, in fact, was ensuring that Anwar does not look like a lone psychopath. Such that he would be scapegoated and become a vessel for the much bigger regime. In so far as I couldn’t go into the details of how the United States was complicit with all of this, because fundamentally to do would involve having experts and countering people’s denials and turn the film overall into a historical film as opposed to an expose about the present, which is what it is.

Somehow it was really important therefore to ensure that America and consumerism and the global capitalism of which this is the underbelly — this isn’t a distant reality separate from us — this shows the violence and fear and impunity underneath everything we buy and produce, every article of clothing we’re wearing. Given that I couldn’t get into the role of the United States in all of this I had to make globalization, consumerism, alienation, the transforming of everybody, even our human relationships, into objects to be consumed — you see it in the way they treat the women, the paramilitary leader treats women — that that would be a kind of haunting the whole film.

Anwar was the 41st killer I met. Every perpetrator I found, everyone I met was boasting about what they had done and offering to take me to the places where they killed, whereupon they would launch into these spontaneous demonstrations of who they killed. So what I was saying is, look you have participated in one of the biggest killings in human history, your whole society is based on it, your lives are shaped by it, you want to show me what you’ve done, I want to understand what it means to you, what it means to your society, how you want it to be seen, how you see it, how you really see yourself, so show me what you’ve done, in whatever way you wish, whatever process, and I’ll film the reenactments and make a film out of that.

Of course, that’s what Anwar and all the men are desperate to avoid doing, admitting that what they’ve done is wrong. And in that sense every reenactment is a kind of insistence that what they’ve done is right. To reenact, to make a scene about the killings is to deny the moral meaning of it being in bad taste, and it is an outrage. I film it as a symptom of impunity. But every reenactment therefore is a sort of insistence on that denial, that this is not what it was. This is not what it means. It’s only a movie. It’s not so bad. It was justified. The method was to shoot a scene, show Anwar the scene, he would respond, shoot the next scene.

It’s not to say that Oppenheimer’s statement makes all my doubts go away. It doesn’t, but I do understand his point and I don’t see any ethical reason why this shouldn’t exist. On the other hand, aesthetically, I find this absurd. I’m not a fan of parody, of typifying cultural genres, nor do I particularly enjoy carnivalesque non-sense and exuberant staging. Having said this, I do recognize the power of exposing absurdity, through repetition. I understand truth can arise from there. Still, I didn’t watch 90% of the reenactment scenes, for this type of blending of entertainment with historical facts really disgusts me and I also feel there’s no denying that while watching that scenes we, as spectators, are in some sense allowing them to fulfill their dreams to be stars and actors.

Fortunately, the movie has some jaw dropping dialogues (if you’re a sucker for ethical discussions, like me). When we’re already a third into the movie, a decisive figure enters the plot: Adi Zulkdry, another executioner. When we reach the middle of the movie, Adi has a conversation with Anonymoys (I imagine that voice is his) in the car that I think pretty much resumes the big quest of the movie: a quest for justice, on the part of Oppenheimer, and a quest for stardom, for the killers.

Anonymous: I don’t mean to make you uncomfortable, but I have to ask… By telling yourself it was ‘war’, you’re not haunted like Anwar. But the Geneva Conventions define what you did as ‘war crimes’.

Adi: I don’t necessarily agree with those international laws. When Bush was in power Guantanamo was right. Saddam Hussein had weapons of mass destruction. That was right according to Bush, but now it’s wrong. The Geneva Conventions may be

Anonymous: But for millions of victims’ families if the truth comes out, it’s good.

Adi: Fine, but start with the first murder Cain and Abel. Why focus on killing the communists? Americans killed the Indians. Has anybody been punished for that? Punish them! For me, re-opening this case is a provocation to fight. I’m ready! If the world wants continuous war, I’m ready if you wanna make  us fight, I’m ready!

Anonymous: What if you were brought to the international court in the Hague?

Adi: I’d go! I don’t feel guilty so why would I go? Because I’d be famous. I’m ready! Please, get me called to the Hague!

It’s undeniable: the movie had consequences; Oppenheimer’s choices had very real consequences. Apparently, The Act of Killing managed to expose some of the fallacies of the regime and, at the same time, tell youths a different story, give them the power to come into their own critical conscious. Mette Bjerregaard screened the movie at a university in Yogyakarta and recounts how the film provoked anger and frustration among the audience:

Their feelings were not only directed towards the Indonesian power structure, but also at the spectacle on screen. The killers – fans of film noir gangster movies and Hollywood musicals – choose to re-enact their crimes by juxtaposing killing and cruelty with dancing and bright colours. The film becomes ludicrous as well as scary. It could be described as amusing, albeit with a macabre undertone. Indeed some moviegoers outside Indonesia have laughed at the sheer absurdity – a markedly different reaction to that of the Indonesian audience.