So much has been said about Leif Sandberg‘s project Ending that words fail me. Still, the quality of his work and the importance it has for those, like me, who embrace photography both as a means of artistic expression, but also as a therapeutic tool, brought me here.

At Lenscratch, Aline chooses to stick to Leif Sandberg’s description of his project, and, for starters, so will I:

The Ending project is my first major photo project, with its roots in panic anxiety and the fear of growing old. After surgery for possible pancreas cancer 2007, followed by a year’s convalescence, I was faced with the inevitable question of what to do with the rest of my life. A second chance. An interest in art and photography has followed me since my teens, although that was not my choice in life. Until now.

Death becomes palpable when it approaches, and the pictures contain questions of fear and uncertainty, but simultaneously the joy of aging together with a life partner. The pictures have grown over a five-year period. Often a photo session with an original idea inspired new pictures created in the moment and the plan had to give way for intuition and guts feeling. Possibly a way to get close to who you and exploring your inner self. – Leif Sandberg 2017-03-01

Leif Sandberg’s “Ending” arrived in the mail with no mention preceding its arrival. Upon opening the package a feather and an anvil fell onto my groin. I have carried them since like a pebble in my shoe that I refuse to set aside or extract. The cover of the book is a stark and compliant set of suture stiches from a surgical embrace that I had gathered would be the nexus for my introduction within. And within the pages things would expand. Throughout the book, death and near death lay prostrate as illustrated by photographs of Leif and presumably his wife in various invocations between the slippage of time and the way in which light illuminates its half-steps of failure to recognize a insoluble self. Leif lies prone on cold wooded Swedish forests. Dirt covers his back, but his limbs refuse to stop their dancing. Saint Vitus speaks highly of Leif looking over the edge of a looming finitude. There is a rage within. A rage for a near miss, the brush with death like that pebble in the shoe that Leif retaliates against. The images are not grim, they are opposing. They oppose the inevitable. They express what it means to understand the value of life and its continuance. Leif has cheated the boney grip and is celebrating the severed tentacles wishing to charge him with a sentence of entropy’s gain. 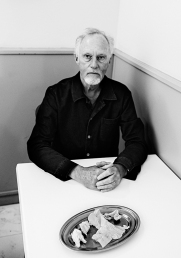 Ending is all that I love in photography. It’s authentic, it’s dark, dynamic and sincere. It’s a part of the author’s life and energy that otherwise wouldn’t exist. It’s not like this life wouldn’t have been materialized if not for these photographs. It wouldn’t exist in the first place, for art happens in its making and another I (the only I that is an author) appears in the process. It’ refreshing to see. Although I do recognize some of the influences, I feel like I’m also offered an unique dimension, maybe that of Leif Sanberg’s passion for art and life. Thank you Leif!