Between performance and theater

Vito Acconci passed away last Friday, the 28th, at 77. Acconci’s performances were partly responsible for my interest in staged photography, which then developed into an interest in durational performance, again inspired by Acconci, Tehching Hsieh and Marina & Ulay’s performances. When I heard the news about Acconci’s death I remembered something he once said about Marina Abramovic’s retrospective at Moma. According to Acconci, most of what was happening during that exhibition was not performance, instead he thought they were theatrical pieces. Because I tend to agree with him (though not regarding the performance The Artist is Present), I often think about what separates performance from theater and, in that process, I also question whether these characteristics are merely descriptive or if they entail an evaluative measure.

For me, the question that always triggers this discussion concerns the temporal aspect of the performance: What is its duration? Is it unique or is it a repetition? But these questions tend to follow the million dollar question regarding performance (or whatever art form, for that matter), that is: What defines a performance? or What is its most distinctive quality?

I haven’t been doing any reading on the subject, it’s just something that I think about, now and then, particularly when a performance hits the stage for the second or third time. And yes, I immediately become a little frustrated when that happens, as if something sacred had just been profaned. But it’s not performance, itself, that is violated or corrupted when repetition takes over. Instead, the word “performance” is and I question the necessity of attaching such a label to something that has as such an important historical value. What I mean is: performance or, as some like to call it, the art of action, is, in its nature, anti-systemic. Its ephemeral nature defies the art market, the nominal structure, the value systems, the necessity of the white cube and, above all, it revolutionizes the place of the spectator and his/her importance to the making of an artwork. I understand everything evolves, and so do art genres. That’s the way it is and I don’t think we should fight evolution per se. But should we keep using the term performance to describe something that has none of its most important characteristics, namely: being anti-systemic and being ephemeral?

When Acconci addressed Abramovic’s The Artist is Present he said the following: “She turned herself into a sculpture, into an act of endurance: the repetition, the constancy, turned her action into habit: the constant presence of an audience turned her so-called performance into theater.” Although I think durational performance is about a sort of change that, undeniably, has to do with repetition, I also think that this repetition is very different from the repetition at play when someone re-stages a performance, as was the case in Marina’s retrospective of some of her former works. The question is: is a performance still true if it is performed by someone other than the original performer? Can a performance be interpreted? I think the answer is quite clear: it can’t. Both its anti-systemic and its ephemeral nature will be lost in that process, so why insisting on re-staging it and call it a performance? Is the art world that greedy? Are the artists that vain?

Let’s try for another example. Last month, in Portugal, a performance made a fuss in Lisbon: Héctor Zamora‘s (b. Mexico, 1974) Ordem e Progresso (‘Order and Progress’). The performance opened on the re-inauguration of one of the latest “museums” in Lisbon (not worth going into that), called MAAT. Although the performance lasted for only one night, it was then turned into an installation that occupied the space for an entire month. The “performance” consists in a group of men destroying seven vessels. The installation consisted on the wreckage of such vessels plus the sound of the happening itself.

This is ‘Order and Progress’ third restitution. It first happened in Lima, Peru. On that occasion, the statement of the author starts with the following paragraph:

On its second happening, ‘Ordre et Progrès’ went indoors, inside the Palais de Tokyo, in Paris, France. On that occasion, Zamora’s statement kept the same, yet in his site there’s a quote from someone else (not credited) that reads:

Of different kinds and with different features, the boats represent the traditional vessels of Portuguese fishing villages and cities, such as Sesimbra, Ericeira, Nazaré, Aveiro, and Figueira da Foz. The boats, autentic examples of Portuguese artisanal fishing, were selected because of their advanced state of degradation. They were all built between the late 1960s and the early 2000s. Some display national symbols that invoke the period of the Portuguese Discoveries; and others were baptized with names that refer to the traditions and mysticism of the fishing communities, or to the local culture and folklore.

to which she adds that

Zamora uses the configuration of the gallery to create a spatial boundary that separates the audience from the stage. The visitor is limited to the role of a passive spectator, watching as the fishing vessels are destroyed by a group of workers. Using manual tools such as mallets, hammers and axes, these actors/performers will turn these ships into pieces, as if they had been destroyed in a shipwreck or naval battle. Most of them immigrants themselves awaiting the opportunity of a job, the workers were hired through a Portuguese recruitment company. This particular detail is a pertinent and timely criticism of inequality in our contemporary world, of the inextricable relationship between the imperialist policies of the most powerful nations and the refugee crisis, but also of the way migration can be used as a tool and device for social transformation. In this perspective, there is a clear (and curious) parallel between these workers and the combatants in the original naumachias, who were mostly war prisoners, Christians, or slaves—the victims or Roman imperialism.
In Ordem e Progresso, body and action are politicized in an immersive performance, charged with theatricality and dramatism, and with a special focus on the poetics of the gesture. The presentation of this piece invites us to reflect upon the role of images, upon violence and upon the numbness of our contemporary society towards it. Much like in the games of the Roman world, this piece transforms the spectator into an abstract, passive, and contemplative subject, fascinated by the violent action of the destruction of the ships. […] 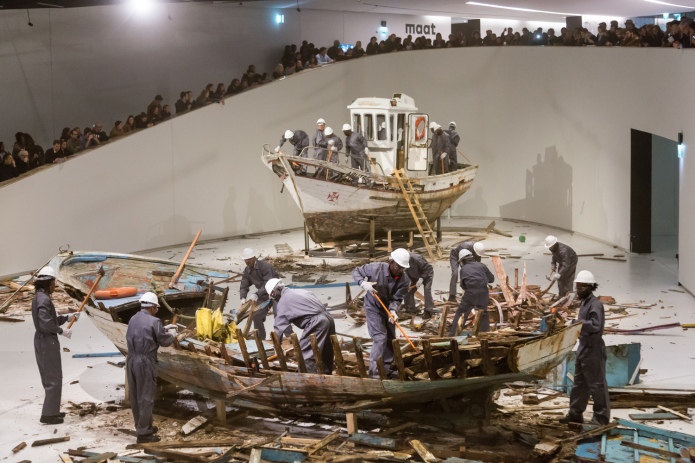 A series of question immediately arise from the curator’s statement, namely: Is it appropriate to say that Zamora uses the gallery space, in this context, when the performance originally happened in the streets of Lima, Peru? What is the purpose of calling the workers (who she then describes as migrants hired through a recruitment company) actors/performers? Does this mean that if I play a part in a play I immediately become an actress? If I show a piece in a gallery do I immediately become an artist? What adds value to the work, is it the institution?

Truth be said, this “performance” really annoys me, for I can’t see how the political and social dynamics become its content. If they were, shouldn’t it have a transformative power other than a conceptual one. Can we really say that body and action are politicized if what is “regenerated” is only the idea that progress arises from destruction? How does politics affect the workers (the black workers, one should add) after the piece is over? Are they only playing a role? So isn’t this just theater? How much were they paid?

Instead, I think this functions just as another critic to the art world, but it is hypocritical, being that it is a repetition (no original value, besides the symbols evoked), it is happening inside a gallery space, in a museum that is financed by a huge corporation, it objectifies the worker’s body as strength value, and it ridicules the viewer. Where is the seriousness in all this? And the content? And how legitimate is that we keep making art jokes around the passiveness of the spectator?