Photographs of animals and fake news

Animal lovers aren’t a particular type of human beings. Any deviation from this assessment would be, I think, discriminatory. Patterns tend to arise when, in an effort to synthesize, we shorten the analysis phase. Populism gallops this wave: people behave more like irrational animals – reacting and acting on instincts – and less like the rational animals we are – with our capacity to articulate experience, intellect, emotion and language.

Our love of animals and our willingness to believe in an idea of inner goodness prompts us to act like complete idiots when faced with images that use animals to promote moral values that society somehow links to heroism. This week, following the widespread news about the catastrophe that has been taking place in Amazon, an image of a military holding a jaguar inside a river became viral. Its immediate reading being that the man was rescuing this wild animal from the fire and, furthermore, that when in crisis, animals and humans behave compassionately.

What I find most interesting in this case is how ready people are to believe this; how quickly their brains shut down when confronted with images of love and kindness portrayed by animals. We, the people – the most dangerous species alive – want to believe that another world is possible. So there’s hope (?).

In this picture, when looking at the wildcat, do we not see the collar or do we choose not to consider it? Do we really believe a wild animal, in its wild state, would trust a human to save it?

The version above is how I first crossed paths with the image on facebook.

Then again on facebook, after seeing the above version a few more times (shared in a page called ‘Pet lovers for Bernie Sanders’): 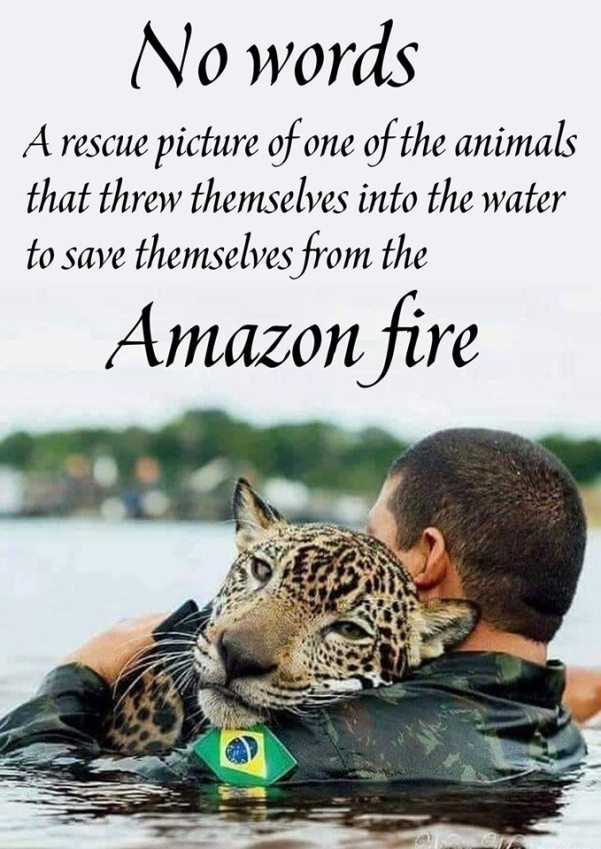 Without loosing the entire day trying to get to the bottom of the story, here’s what I could understand after reading different sources:

This jaguar is likely to be called Jiquitaia.

In Amazon, this species is in danger – particularly because of hunters wanting to trade its fur.

Military people often rescue them and turn them into mascots. They train them. From what I’ve read, I wasn’t sure if the goal was be to give them back to nature or if they were kept in captivity.

There’s a well known episode about one of the rescued jaguars called Juma, who was paraded by the army and then shot dead after the event was over and she tried to flee.

In many sites trying to clarify the use of the above image of the wildcat with the soldier, it is said that s/he is Juma. It seems like that’s another fake news.

One thought on “Photographs of animals and fake news”