Caption (image above): A large anthotype photograph made with chlorella and blue dye (120x55cm). View from the lab at Tira-Olhos (by Alexandre de Magalhães).

So in March 2018 a group of four – myself, Paula Lourenço, Alexandre de Magalhães and Miguel Duarte – started a series of conversations about setting up a photography lab where we could all finally work together under our own terms. We all have a history working with historical printing processes and experimental photography and had been struggling for years with not having a suitable environment to work in. Like many other photographers and printmakers we’ve all been working in basements, kitchens, bathrooms, etc. and were struggling to get things done in such environments.

We all teach photography in undergraduate courses and the way we’ve been feeling about what’s going on in the educational system potentiated the decision to start this adventure. Not only were we looking forward to having a space where we could create our projects, but we were also contemplating the opportunity to finally teach with a different pedagogical approach, focusing more on the experimental side of things and the time needed to develop from there.

Between March 2018 and July 2019 – the date we finally created the Association and rented a space – there where countless conversations and changes to our plan. Miguel, who was part of the initial project, ended up not joining us in the end. He is now head of a photography department where he also teaches and that consumes most of his time. During those 15 to 16 months, we searched for a place to rent in Lisbon and considered moving out of the city. As a result of internal politics that reflect a neoliberal approach to urban space and the economy of tourism, Lisbon is undergoing a huge transformation. Historical buildings are being bought by enterprises and transformed into airbnb’s and things alike. The lack of spaces to rent (among several other things) turned our task of finding a home for the Association a painful experience. I can’t say how many places we visited.

When we first started looking for a place, we considered partnering with our good friends at Hélice, since we were already working together in projects like Propeller. However, the challenges of finding a suitable and affordable place for us all made it impossible. They settled in a shared space and we kept dealing with the real estate market until finally, in June, as I was on my way to meet Paula, I happened to park the car in front of a place with a rent sign. We ended up calling, immediately visiting the place and finding our home. We moved in shortly after, in July 15th and started working on the space and building things. Three months later and, finally, the lab is ready. There’s still some fine-tuning needed, but we’re definitely good to go. 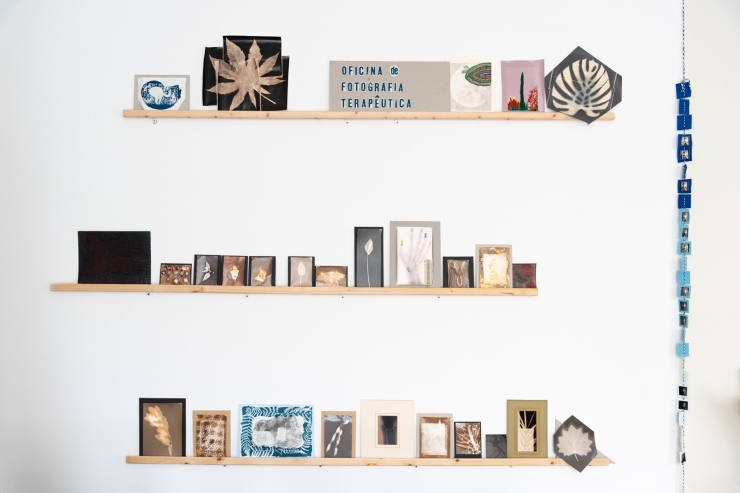 We worked the entire summer on the space, mixing heavy with creative work. My oldest niece visited, becoming the first to join us in doing creative work inside the space. During that time, we spent our days between wood work, painting jobs and doing lumens, cyanotypes, transfers, anthotypes and creating playful posters. Late in August we were invited to exhibited at Cossoul and said yes. Although the lab was not yet ready we though it wouldn’t be any more challenging than before. We decided to make everything from scratch and managed to put up a small show – Trapézio – in about 15 days. Lost some weight, ended up poorer and with some bruises, but felt happy. Gerador and Cossoul were our first collaborations as Tira-Olhos and in the middle of all the heavy-work and bureaucratic stuff we were trying to resolve, they were life savers. So thanks to them and, in particular, to Virginia (at Cossoul) and Hugo (at Oficina do Cego), for putting us out there so quickly.

Something needs to be said about the bureaucratic process since this all started. To register the Association it was quite simple. We adapted the constitutional terms to our own needs, payed 300 euros and it was official: TIRA-OLHOS had an headquarter, a tax and a social security number. Of course nothing is quite simple in Portugal. When we called to confirm the documents we had to bring in order to register they said something and when we got there it was a different story. We managed. The employee that received us and quite comprehensive and facilitated the procedure. That part was over and done. To make our financial activity official it was harder. In the offices, I watched three employees discuss the conditions of our application. They kept asking one another about the terms; none really sure about them. They finally agreed on the conditions after a long morning. Although we had to deal with several other institutions in this process, nothing compares to the ordeal with the banking system. So in Portugal we cannot open a financial activity without a bank account (imagine is similar in other countries), so I visited 6 banks before we could finally open an account. In most cases the conditions were terrible, in some just not the best. Because I live outside the city, in a small village, it was there I finally found what we needed. A nice employee in one of the banks said the remembered a clause that was suitable to our needs and exempted us from paying monthly fees. She called a colleague, they both searched the files and finally presented a decent proposal. Paula dealt with water and light resources; confirming that this bureaucratic process is entirely about people and their willing to help and do their jobs, instead of appropriating the power that comes with such positions.

It’s been an incredible ride so far and what a learning experience! Although we’re very much used to working together in different circumstances, this shared experience called forth a different set of skills and it’s been fun to see how we work around the issues to build things. We gathered all the equipment we have and moved it to the atelier. Friends like Miguel Duarte, Antonio Rebolo, Pedro Tropa, Barbara Lehmann and João Paulo Serafim have gifted us some equipment we lacked; Isaac helped design the ventilation system and Liliana helped with the heavy job of making the curtains for the entire lab. My parents, particularly my father, has been tireless, helping us find good people to do some heavy work and putting us in contact with the enterprise that build the lab sinks. The neighborhood has also been particularly generous and we’ve been able to glean the most incredible things.

So before we finally present a program of workshops and activities, we decided to create an Open Day, so that everyone can come visit. We’ll be making some demonstrations and interactive experiments, but mostly embracing visitors and showing what we do. So next Sunday, on the 27th, come along if you’re near town; it’ll be a pleasure to welcome you. Our address is: Rua Jacinto Nunes, 8B.

2 replies on “A new adventure: TIRA-OLHOS”